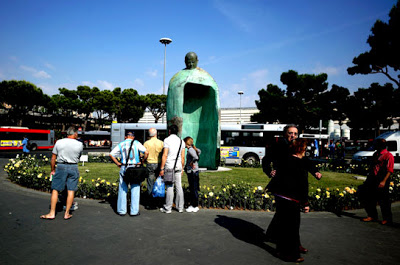 What happened here? Did the artist run out of metal? Seriously. I’m sure this meant something to someone but it’s beyond me. It’s pretty tough to mess up a statue of one of the most beloved men of the century. I mean, people want to like it. Just make it look vaguely like him and people will like it.

The nice thing is that homeless people now have a spot to shield themselves from the rain. Of course, this will be a coveted spot by the homeless so there will probably be knife fights in John Paul II’s sternum area.

There’s seriously a lot of room in there. You could hold a Zoomba class in there pretty comfortably. Maybe they could rent out space.

An enormous statue of John Paul II, unveiled in front of Rome’s central station just weeks after the former pontiff was put on the path to sainthood, has sparked controversy – with locals calling for it to go.

“We don’t want this statue, they have to get rid of it. It looks like a box and it’s embarrassing us in front of the tourists,” said an elderly woman quoted in Italy’s Repubblica daily.

“I really don’t like it, it looks like a sentry box,” said a priest who had come to watch the unveiling on Wednesday.The five-metre-high bronze statue, designed by the Italian artist Oliviero Rainaldi, depicts John Paul II with his arms outstretched, reflecting the pope’s “message of welcome and openness towards others”.

I’m thinking people will come from far and wide to see this. But not for good reasons.