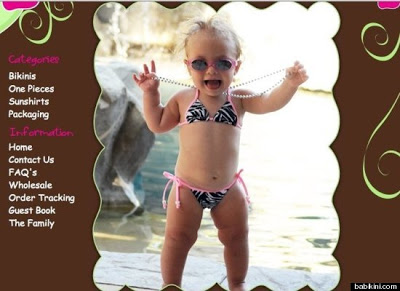 I imagine that in the future there will be a great debate between liberal archaeologists over why Western civilization failed? Oh, there will be plenty of theories. Some will probably say it was President Palin’s fault. Others will say it was the bitter clingers of Christianity.

There will be papers published called “Understanding the Backwards Societal Trends of 21st Century Christians and How Their “Principles” Undermined Social Growth Causing Conflict and the Collapse of a Middling Civilization.” There might even be a college course. PBS will do a special hosted by Christianne Amanpour (who will still be alive due to her strict diet of human brains and asparagus leaves.)

But you wanna’ know why civilization failed? If you really want to understand why Western civilization essentially imploded in the 21st century it will be…Baby-kinis.

I’m not saying some stupid manufacturer pushing controversy is the end of civilization. But it’s part of it. It’s not the whole thing. It’s a symptom that we don’t know what anything is anymore. Everything is open to redefinition.

Look, the institution of marriage is open to any conglomeration of consenting adults, babies in the womb aren’t babies -they’re disposable blobs of tissue. And the innocence of childhood is just an introduction into being future sexual objects. Nothing just is anymore. Everything is whatever we want it to be. And I know someone will read that and think “yeah. That’s what freedom is.” But that’s not true. It’s not true at all. There’s a difference between freedom and anarchy. There has to be.

I’ve never heard a recipe for success for any long term venture to be “we’ll make it up as we go along.” As long as anarchy is the end goal we’re all just in a slow motion suicide pact.

And yeah, this baby-kini has the word “juicy” on the rear.
Tell me you’ve seen a clearer sign of the apocalypse than this.