This Is Your Team 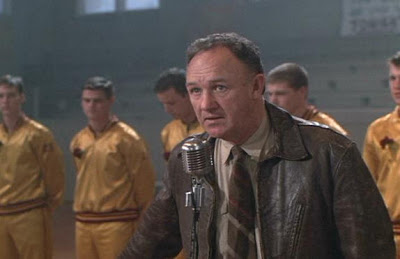 As I think Barack Obama is destroying this country more effectively than Godzilla took out Tokyo I sat down to watch the debate the other night. As they came out I saw John Huntsman, Ron Paul, Tim Pawlenty, Rick Santorum, Herman Cain, Michelle Bachmann, and Mitt. I like some of them but I worry about their electoral chances. Others, I think could get elected but I don’t trust.

Immediately, I found myself running the names of those whom I wish were running like Chris Christie, Paul Ryan, Bobby Jindal, or Sarah Palin.

I couldn’t help but be reminded of the scene from Hoosiers where Coach Norman Dale played by the great Gene Hackman introduces his team to the students only to hear them all cheer “Jimmy! Jimmy!” for the star player who wasn’t going to play.

Hackman then returns to the microphone and says:

These six individuals have made a choice to work, a choice to sacrifice, to put themselves on the line 23 nights in the next 4 months to represent you, this High School.

That kind of commitment and effort deserves and demands your respect.

This is your team.

After Perry today, maybe we’ll get some other candidates joining the team like Jimmy did in “Hoosiers.” But maybe not. And some of these candidates could do great things if given the chance. I guess I have to stop hoping for the perfect candidate. This is the team.