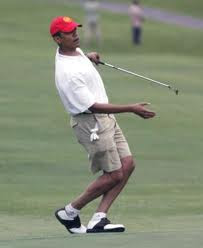 Interesting perspective. I wonder where America could have lost its competitive edge. It couldn’t possibly have anything to do with a government that blows billions on green energy boondoggles while making it harder to drill for oil while trying to make electricity rates “skyrocket.” It couldn’t have to do with extending unemployment benefits to 99 weeks (and rising), or to bailouts or…

Seriously, in 2008 we elected a community organizer, state senator, college instructor first term senator over a guy who spent five years in a Vietnamese prison. And now he’s lecturing us about how America’s gone “soft”? Really?

I can’t help but think of Jimmy Carter’s Malaise speech which has gone down as one of the more “tone deaf” speeches by an American President. Methinks this comment may be seen again during the 2012 campaign.