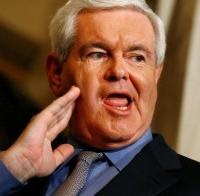 So if you had told me a month ago that a pro-life Catholic man was looking strong for the GOP nomination I would’ve thought that Santorum’s campaign caught fire or Governor Bobby Jindal entered the race.

But alas neither of those two things happened. New Gingrich is currently making a strong run in the polls.

White House hopeful Newt Gingrich, the former US House speaker whose campaign to win the Republican nomination appeared all but over just weeks ago, has surged toward the front of the pack.

His campaign’s revival follows the rise and fall of leading rivals, most recently former Godfather’s Pizza chief executive Herman Cain who is battling a sexual harassment scandal and stumbled badly Monday in responding to a question on Libya.

The Republican Party has struggled to find the right alternative to frontrunner Mitt Romney, the former Massachusetts governor seen by many as the most formidable challenger to President Barack Obama in the November 2012 election but who has been unable to gain support of the party’s conservative base.

While congresswoman Michele Bachmann and Texas Governor Rick Perry, two conservative party rivals, shot to the top of the heap as soon as they entered the race only to see their campaigns fizzle, Gingrich has trended in the opposite direction.

His detailed ideas to overcome such US hurdles as budget deficits coupled with his recent string of strong debate performances has helped reignite the campaign, political operatives said.

Gingrich took the lead in a Public Policy Polling survey released Monday with 28 percent support, compared with 25 percent for Cain and 18 for Romney.

A pro-life Catholic GOP nominee! But why aren’t I more excited? Wait. Why aren’t I excited at all?

What is it about Newt that makes this Anybody but Mitt Republican feel like…meh. There’s the stepping out on the wife. There’s the global warming ad with Pelosi. There’s lots. How about you?

And should we be taking this surge seriously? I mean, it seems like every two weeks we have a candidacy surge to the front and then falter back behind Romney. Will the Newt bubble be different?

But if we discard Newt, who else is there? Will the specter of Mitt force me to accept Newt?

I can’t believe there’s a pro-life Catholic that I’m not interested in for the Presidency. Sad.