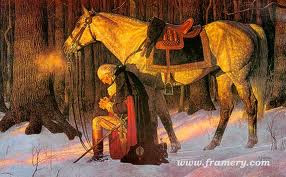 There’s this strange image I’ve seen many times of George Washington on his knees Tebowing which is based on the journal entry of an 18th century Presbyterian Minister. But this is, of course, impossible, because George Washington was born well before Tim Tebow engineered his first fourth quarter comeback.

I listen to the media so therefore I know that Tebow is the first person to do this odd physical gesture of falling to one knees and conversing with the Creator. So I wonder what George Washington was doing on his knees. Perhaps he was simply foreshadowing Tebow.

Rev. Nathaniel Randolph Snowden, an ordained Presbyterian minister and graduate of Princeton with a degree from Dickinson College stated:

“I knew personally the celebrated Quaker Potts who saw Gen’l Washington alone in the woods at prayer. I got it from himself, myself. Weems mentioned it in his history of Washington, but I got it from the man myself, as follows:

“I was riding with him (Mr. Potts) in Montgomery County, Penn’a near to the Valley Forge, where the army lay during the war of ye Revolution. Mr. Potts was a Senator in our State and a Whig. I told him I was agreeably surprised to find him a friend to his country as the Quakers were mostly Tories. He said, ‘It was so and I was a rank Tory once, for I never believed that America c’d proceed against Great Britain whose fleets and armies covered the land and ocean, but something very extraordinary converted me to the Good Faith!” “What was that,” I inquired? ‘Do you see that woods, and that plain. It was about a quarter of a mile off from the place we were riding, as it happened.’ ‘There,’ said he, ‘laid the army of Washington. It was a most distressing time of ye war, and all were for giving up the Ship but that great and good man. In that woods pointing to a close in view, I heard a plaintive sound as, of a man at prayer. I tied my horse to a sapling and went quietly into the woods and to my astonishment I saw the great George Washington on his knees alone, with his sword on one side and his cocked hat on the other. He was at Prayer to the God of the Armies, beseeching to interpose with his Divine aid, as it was ye Crisis, and the cause of the country, of humanity and of the world.

‘Such a prayer I never heard from the lips of man. I left him alone praying.

‘I went home and told my wife. I saw a sight and heard today what I never saw or heard before, and just related to her what I had seen and heard and observed. We never thought a man c’d be a soldier and a Christian, but if there is one in the world, it is Washington. She also was astonished. We thought it was the cause of God, and America could prevail.’ “He then to me put out his right hand and said ‘I turned right about and became a Whig.'”

Imagine that, the founding Father of the United States of America Tebowed. Who’d a thunk it? What a nutjob, huh?