Santa Goes Postal…At Least He Did. 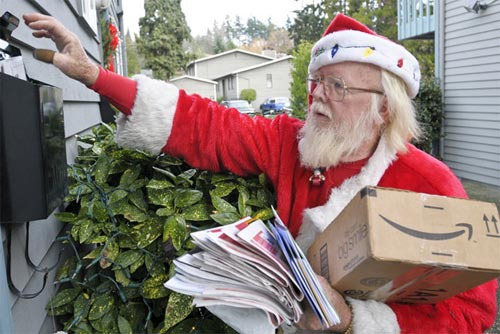 Oh the horror! A fat old guy with a long white beard had been dressing up as Santa while delivering mail. Kind of an eccentric individual, I’m sure. But isn’t that the kind of thing that makes the world go round?

But someone complained and now he can’t play Santa anymore.

What is wrong with this country?

I found the story on Weasel Zippers interesting because of the assumption at the heart of it. It’s not even contested.

Bob McLean has been dressing up as Santa for the past decade, donning a red suit to deliver the mail along his route in Bellevue, WA. He even has a snow white beard – that’s real.

“The government is shutting me down because it’s a non-postal regulation uniform, McLean told the Bellevue Reporter. “This was the first time; I don’t know what happened. I don’t step on anyone’s toes. Being Santa isn’t religious to me; it’s secular. It’s about giving.” […]

Isn’t that interesting how everyone just assumes now that you can’t express any religion in public anymore, especially if you’re a government employee.

But that means as the government grows it increasingly crowds out religion. According to the Wall Street Journal, “today in America there are nearly twice as many people working for the government (22.5 million) than in all of manufacturing (11.5 million). This is an almost exact reversal of the situation in 1960, when there were 15 million workers in manufacturing and 8.7 million collecting a paycheck from the government.”

Between the federal, state and local government millions of people are employed and can’t show their religion in public. And does anyone think the government’s going to get smaller any time soon? Yeah, me neither.

And the federal leviathan erases religious expression and individualism in general. In short, it’s a killjoy. And look, I understand if you’re the manager at the Post Office and you know that if you let this one guy dress as Santa you can’t come down on other guys for uniform infractions so you just have to force everyone to be the same. Otherwise HR will come down on you and I’m sure there’s a hundred layers of bureaucrats who have nothing to do but critique your management style above you.

But you know what happens in this kind of Big Government lawyers rule the world thinking. We end up with something like this:

Government kills all individual expression, especially religious expression. But all kinds of expression too. That’s one really good reason to cut back government. In America we shouldn’t be afraid of individuals. If a guy wants to dress up as Santa, let ’em.

In short, Big Government is boring. Individuality is at least interesting.