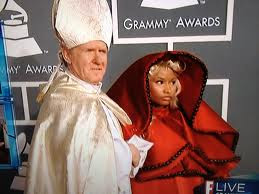 Just a decade or two ago, a little anti-Catholicism went a long way. It got you glowing media and adoring fans and all the attention a growing pop star needed to feed a career.

In the 80’s and 90’s, Madonna did wonders for her career with Catholic bashing. Hey, a little sacrilege used to go a long way.

But poor Nicky Minaj didn’t get the memo that the country’s moved on from when a little blasphemy bought you a career. She’s been working on the old playbook. This country’s been beating on the Catholic Church for so long it’s gotten…well…a little boring.

Poor Nicky Minaj showed up to the Grammys with a dude dressed up like the Pope and then, according to The Catholic League:

Minaj’s performance began on stage with a mock confessional skit. This was followed by a taped video depicting a mock exorcism. With stained glass in the background, she appeared on stage again with choir boys and monks dancing.Perhaps the most vulgar part was the sexual statement that showed a scantily clad female dancer stretching backwards while an altar boy knelt between her legs in prayer. Finally, “Come All Ye Faithful” was sung while a man posing as a bishop walked on stage; Minaj was shown levitating.

Look at how upside down the world is. Just a decade ago Madonna made a career out of bashing Christianity and it was scandalous and people talked about it and couldn’t believe what she’d just said or done. But nowadays this country is scandalized by someone like Tim Tebow. Yeah, Tebow is called controversial. He’s scandalous. He’s talked about.

Faithfulness and orthodoxy are the new rebellion.