You Look Out Onto the Plane Wing and See… 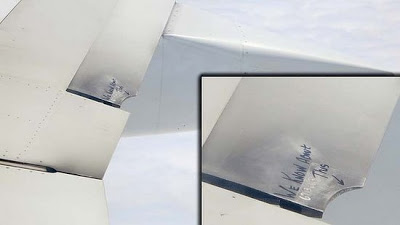 A passenger on an Alaska Airlines flight looked out the window and saw something on the wing that is pretty much the last thing you want to see on the wing of a plane. A gremlin? No. OK. The second worst thing. He saw a hole in the wing. But not to worry because next to the hole was a handwritten note saying, “We know about this.”

I’m not sure the little note would bring me much comfort.

Seattle-based Alaska Airlines says the plane was safe and there was nothing to worry about, according to news reports. There was an approved trim repair to the corner flap on the right wing. A maintenance technician wrote a note on the wing to let the flight crew know that it wasn’t a problem.