Gore Says Weather Right out of Book of Revelation 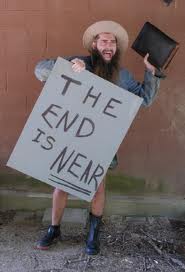 This guy is a loon. He just made millions from oil interests and he wants to preach at us that the thing that sane people call “weather” is going to kill us. And then this lunatic invokes the Bible to do it. Here’s the quote of the day:

“Look at your first story about the flooding in Australia. Today is the three month anniversary of superstorm Sandy here. Two years ago in my home city Nashville, massive flooding. These storms – it’s like a nature hike through the Book of Revelation on the news every day now and people are connecting the dots.”

Al Gore is just a rich version of this guy.

Now, I don’t know much about the end of the world but I can tell you that the end of this country is nigh. You wanna’ know how I know? Al Gore won the popular vote folks. Think about that. And don’t fool yourself that he wasn’t as crazy back then. He was.

Man, thank goodness we avoided a complete raving pro-abortion egotist who quotes from the Bible when it suits him and believes Republicans pose a greater danger to this country than radical Islam as President, huh? Whew.