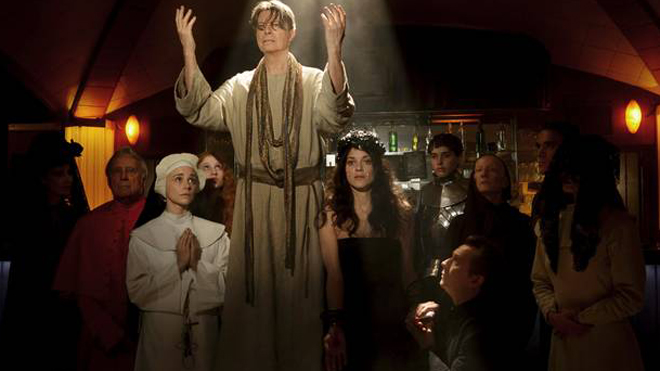 Let’s face it, most people in the world weren’t breathlessly awaiting David Bowie’s new album. I know the people who love Bowie really love Bowie but they’re not many in number. I’m a fan of the man’s music and I was interested in hearing his latest – not enough to go out and buy it but interested enough to check it out on YouTube. And then if it blew me away I might buy it.

So I read something at Fox News about Bowie’s latest today and I got to tell you I’m disappointed. Bowie made a video that puts Catholics in a bad light and brought in all sorts of sexual imagery along with leering priests and all that garbage.

Directed by Fiona Sigismondi, the controversial video opens with a priest played by Oldman punching a street-urchin beggar in the face, then entering a club — while perving at women’s backsides — filled with less-than-saintly behavior. Cotillard embodies a prostitute-turned-saint while Bowie rocks out on stage as the Christ-like figure in robes, while nearly-naked folks dance provocatively around him. In the background, a Cardinal can be seen dealing in cash and a nun prays, all before the stigmata saturates the scene.

It’s not that it’s shocking – which is what I’m sure Bowie wants it to be. It’s that it’s so done. Madonna had made a living mixing religious imagery with strippers. Lady Gaga does it. I think that’s all Katy Perry does.

I want Bowie to be Bowie, not a cheap marketed knock-off of Katy Perry. I’m sure all the people around Bowie are telling him that he’s pushing boundaries but this isn’t that. Every boundary blasting the Catholic Church and profaning Christianity in general has been done over and over and over. And when they do it, they get applause from everyone who agrees with them from all the cool people.

If an artist really wants to shock people they should act as if something in this world was sacred, other than the ring of cash registers.