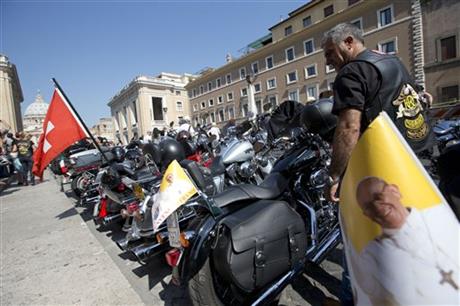 I love this story. Pope Francis blessed thousands of Harley-Davidson riders in Rome this weekend in commemoration of the 110th anniversary of the motorcycle manufacturer.

Thundering Harley engines nearly drowned out the Latin recitation of the “Our Father” prayer that accompanied Francis as he greeted the crowd before Mass. Standing in his open-top jeep, Francis drove up the main boulevard leading to St. Peter’s Square, blessing the thousands of people in what was a giant Harley parking lot.

Once the service got under way, bikers in their trademark leather Harley vests sat in the square alongside nuns and tens of thousands of faithful Catholics taking part in an unrelated, two-day pro-life rally.

Francis addressed them both afterward, giving a blessing to the “numerous participants” of the Harley gathering.

You’d think that Rome was in for a heckuva’ weekend with these guys in town. But not only haven’t you heard anything about terrible misdeeds or tragic mischief but also going on in Rome nearby was a gay pride march. I mean, if you were making a setup for a violent joke it couldn’t get more promising than “So thousands of Harley Riders come upon a gay pride march…”

But the fact that there hasn’t been a news story about a missing gay pride march tells you something.