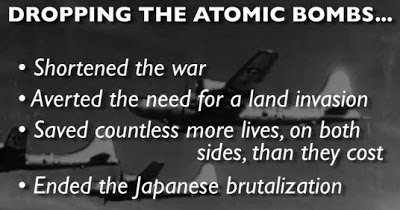 It seems that every year ’round this time, the Catholic commentariate drops bombs on one another discussing whether dropping atomic bombs on Hiroshima and Nagasaki was the right thing to do.

In coverage of this annual discussion, James Todd, who runs the valuable Catholic news aggregator Pewsitter.com linked to a site defending Truman’s decision. For this crime, my colleague Mark Shea to branded James Todd a Republican shill.

How, exactly, linking to an article supporting a 68 year old decision by a Democrat President makes you a Republican shill I have no idea unless you adhere to the absurd notion that Republicans are generally in favor of dropping atomic bombs on people for the greater good. And for sure, Republicans have not cornered the market on the error of consequentialism. I suppose Mark thinks it is ok to drop such rhetorical bombs if greater good can come of it?

For the record, Pewsitter.com also links to Mark’s criticism as well as this video from Fr. Miscamble of Notre Dame also defending the decision. In the video, Fr. Miscamble states that dropping the bombs:

Assuming that all these things are true, does that in and of itself justify the bombing? I don’t see how.

Analogies by definition are faulty but sometimes they can help make clear certain principles at work here.

Say for instance I am a General engaged in war against another General. We have battled town by town and the results have bloody and horrific. I have now been ordered to take the town that he now occupies and he has been ordered to defend the town at all costs even to the last man. History and reason tell me that taking the town will cost many lives on my side and probably most on his side and many lives of townfolk too. These townfolk, supply food and support to the army there, some voluntarily and some not.

Now I know that the attack on the town will be very costly, but I have an idea. Rather than engage in yet another direct and costly attack, I come up with another plan. I discover the names and addresses of the key command officers up to and including the general. I send my agents to capture their wives and children and bring them to the battlefield. I then send a message to to the opposing general and his staff that I will systematically execute their families unless they surrender.

This shocking  tactic finally causes the general to surrender, avoiding the costly battle.  My actions”

Would I be justified in using the tactic of targeting and killing non-combatants as a way to compel the enemy to surrender? Or is my brutality sinful in and of itself, regardless of any perceived or real positive outcome?

I have a hard time imagining that many Catholic thinkers would hold me justified.

Again, analogies are imperfect by definition and perhaps my analogy is more defective than most, but I think some of the principles are the same.