Evolutionist: Humans Come From Monkey Who Dated a Pig 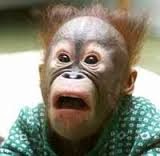 Why don’t they just say they have no idea where humans come from? Is that so hard?

A Ph.D. geneticist is receiving both support and criticism following his claim that humans evolved after a chimpanzee mated with a pig.

Eugene McCarthy is a geneticist from Georgia who founded the blog MacroEvolution.net. McCarthy received B.S., M.S. and Ph.D. degrees in genetics from the University of Georgia, where he worked as a researcher until 2007. On his Google+ profile, McCarthy describes himself as an “evolutionary theorist.”

Earlier this year, McCarthy published a lengthy article on MacroEvolution.net titled “Human Origins: Are we hybrids?” In the article, McCarthy suggests that humans evolved after a female chimpanzee mated with a pig.

McCarthy believes hybridization is a reasonable explanation for the origin of humans, suggesting that “perhaps Darwin told only half the story.”

One question that comes to mind is that monkeys mate for life. Pigs don’t. So it seems to me that, according to this guy, humanity started with a jilted monkey. Kinda’ sad, right?

And the Christian creation story is a bad one? Hey, at least ours doesn’t feature a poor moonstruck monkey.

And now, for your viewing pleasure a picture of a very sad melancholic monkey.