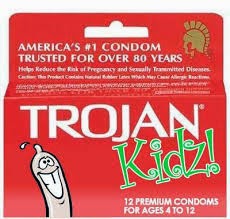 Teen pregnancy rates and STD’s are so rampant in Chicago that Mayor Rahm Emanuel has decided to put free condoms in the high schools. Perfect! Let’s give young hormone crazed teens a false sense of security and a wink and a nod to some profoundly bad decision making.

“I want everybody to understand that doesn’t mean you’re absolved either as a parent or an adult to talk to an adolescent about responsible behavior, respecting who you’re with, and doing what’s right not what’s convenient,” the mayor said.

WBBM Newsradio’s John Cody reports the Chicago Public Schools already have condoms available at two high schools, and will work with the Chicago Department of Public Health to identify two dozen schools to get condoms in the fall.

Chicago’s teen pregnancy rate is double that in New York City. The expanded condom distribution program will be funded by a five-year, $20 million federal grant.

The mayor said he supports the program, but said it would not replace parental guidance.

“That doesn’t absolve a parent from talking to their child about responsible behavior and respect,” he said.

Sure parents can guide their kids…but the school is going to be giving them condoms with their pizza and milk in the school cafeteria. Hope that doesn’t interfere, right? (Cigarettes are still illegal on school grounds though.)

The fact is that study after study shows that increased access to contraception does NOT lead to a decrease in unintended pregnancies. In fact, the opposite is true.

In July 2009 results were published from an expensive three-year program at 54 sites, funded by England’s Department of Health, seeking to “reduce teenage pregnancy” through, among other things, sex education and advice on access to family planning beginning at ages 13-15. “No evidence was found that the intervention was effective in delaying heterosexual experience or reducing pregnancies.” Young women who took part in the program were more likely than those in the control group to report that they had been pregnant (16% vs. 6%) and had early heterosexual experience (58% vs. 33%).11

David Paton, author of four major studies in this area, has found “no evidence” that “the provision of family planning reduces either underage conception or abortion rates.”12 He sums up the U.K. experience: “It is clear that providing more family planning clinics, far from having the effect of reducing conception rates, has actually led to an increase…. The availability of the morning-after pill seems to be encouraging risky behavior. It appears that if people have access to family planning advice they think they automatically have a lower risk of pregnancy.”

Here’s the deal, the moment they took values and prayer out of school, condoms were coming. That’s the deal. If you don’t have morality, you’re going to have kids bouncing off each other like endorphin soaked pinballs for their own enjoyment and paying a terrible consequence for it. All the while, you’ll have the mayor brilliantly tut-tutting and suggesting that this just shows we need more condoms.