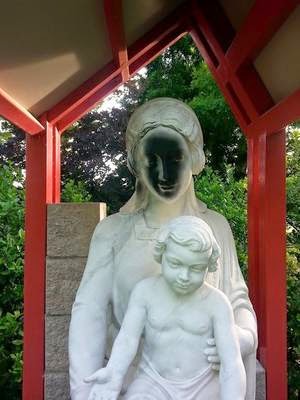 Mass attendees at a parish near the University of Oklahoma were stunned and saddened to discover that a statue of the Virgin Mary has been vandalized with black spray paint and the name of a voodoo goddess “Erzulie” was taped over a sign, according to news reports.

Churchgoers at a Norman parish were upset and unsettled Sunday morning when a statue of the Virgin Mary was discovered vandalized with black spray paint on its face. Photo provided Photo provided. – Photo provided.

“As a parishioner and as a Catholic, I would invite them to learn more about why we revere the Mother Mary and why this would be so offensive.

The vandals painted the statue’s face black and taped the name “ERZULIE” on a sign at the shrine. Erzulie is the name of a voodoo goddess, the Rev. Jim Goins said.

The statue was cleaned but traces of the paint remain. It will be professionally cleaned and the area’s security will be updated, Goins said.

“Our space, our places of worship, our places of prayer, they represent something about our souls, so they are sacred in the sense that they point us toward the divine, toward that which is saintly,” Goins said. “But they also say something about who we are, and to desecrate it, to vandalize it is an emotional violence and spiritually unsettling.”

Goins said more than two dozen people gather at the shrine every Monday evening to pray for cancer patients, regardless of religious background.

It’s open season on Christians throughout the world. The U.S. government is bullying Christians right here and no consideration of religious freedom is given. Our schools deliberately delete God from every conversation and the media portrays Christians as nutjobs. So get used to stories like this.