Actor Neal McDonough on how his Faith Nearly Destroyed his Career 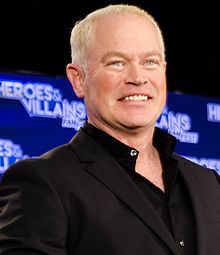 Pretty great stuff from actor Neal McDonough on how his faith and his fidelity to his wife nearly cost him his career. You might not know the name but you’ll likely recognize him.

The father of five was then asked whether he was surprised when his stance on sex scenes got him “fired from Scoundrels,” which aired on ABC from June to August 2010 before it was canceled. McDonough had been cast on the show but was replaced by another actor after three days, reportedly because he wouldn’t film sex scenes with the show’s star, Virginia Madsen. At the time, the network chalked it up to a simple casting change. ABC did not immediately respond to a request for comment.

“I was [surprised], and it was a horrible situation for me,” McDonough said. “After that, I couldn’t get a job because everybody thought I was this religious zealot. I am very religious. I put God and family first and me second. That’s what I live by. It was hard for a few years. Then [Band of Brothers producer] Graham Yost called me and said, ‘Hey, I want you to be the bad guy on Justified. I knew that was my shot back at the title.”

In the end, McDonough said, everything has worked out well for him professionally because the setback pushed him to improve his acting. He’s on the History Channel’s new series Project Blue Book and has several other projects, including the animated Sonic the Hedgehog, in the works.

On the personal level, McDonough said, things have been going well for since he met and instantly fell in love with his wife-to-be after meeting her on the streets of England, where he was filming HBO’s acclaimed 2001 miniseries Band of Brothers.

“Almost 20 years, five kids and just one heck of an awesome life later, to have her as my partner in everything, I’m just the most blessed guy I know,” he said. “That’s why I go to church every day and say thank you to God for everything he’s given me. And most importantly, thank you for giving me Ruvé, because without her, I most certainly would not be talking with you right now.”