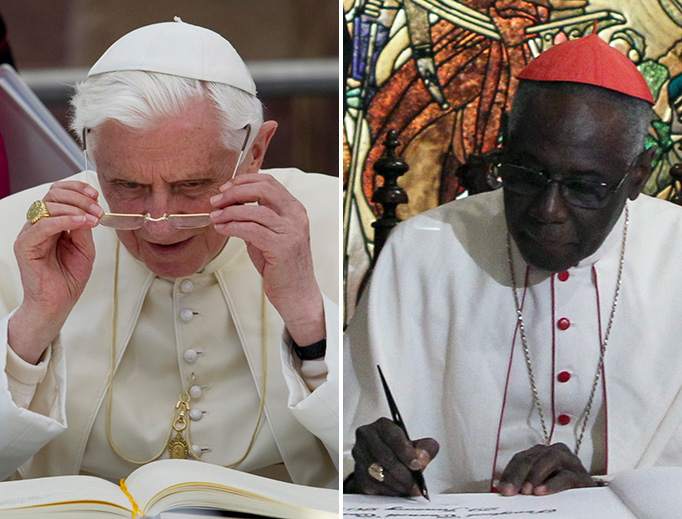 So, am I supposed to call the former Pope “the former author?” Sheesh, this is getting more confusing than when Prince changed his name. And just as a reminder, being compared to Prince about pretty much anything is bad. Very very bad.

Edward Pentin of The National Catholic Register has really done great work (as always) and summed it up well:

Beginning with Cardinal Sarah’s statement, published Jan. 14, we learn that:
On Sept. 5 last year, after visiting Benedict XVI at his Mater Ecclesiae residence, Cardinal Sarah wrote to the Pope Emeritus to ask him to write a text on the priesthood, especially on celibacy.
He told him he didn’t expect Benedict to agree because of the “polemics” that such reflections could “potentially stir in the media” but that he was “convinced the entire Church needs this gift” that could be published around Christmas.
On Sept. 20 Benedict replied, saying he had actually begun to write a text on the subject and Cardinal Sarah’s letter had encouraged him to finish the task.
On Oct. 12, Benedict gave him a “long text” and Cardinal Sarah thought it too profound and lengthy for a newspaper. He therefore “proposed to the pope the publication of a book, integrating his own texts as well as mine.”
Following “several exchanges in order to develop the book,” on Nov. 19 he sent a “complete manuscript” to Benedict, “as we had jointly decided, the cover, a common introduction and conclusion, the text of Benedict XVI and my own text.”
On Nov. 25, the Pope Emeritus expressed his “great satisfaction concerning the sections prepared in common” and wrote a key sentence: “For my part, the text can be published in the form which you have planned.”
On Dec. 3, he visited Benedict to explain “our book” would be printed over the Christmas holidays and released on Jan. 15 and that he would “bring him the work at the beginning of January after returning from a trip to my homeland.”

So he wrote it but he’s not an author?

The saddest part of all of this is that this book is a reiteration of Catholic teaching. Yet somehow it’s being viewed as an attack on the current papacy. That says a lot about the confusion that is rampant nowadays.