New Testament “Scholar” Wonders if Jesus was a Wizard 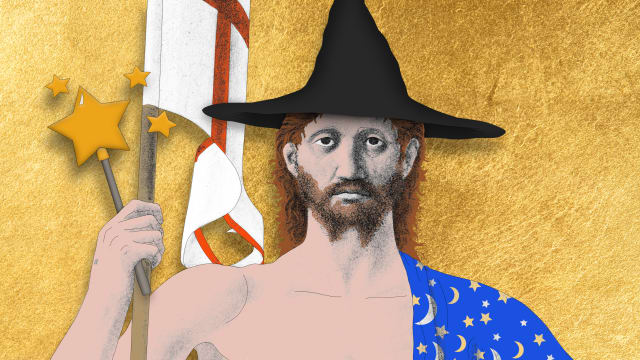 I remember I was working for The Cardinal Newman Society at the time and she’d just come out with a book saying that the Catholic Church exaggerated the number of early martyrs in order to gain followers. Seems counter-intuitive but hey, I’m not scholar. She seems to have enjoyed the notoriety because her writings since then seem to all me at attempt to draw attention.

Because she’s always willing to poke holes or question Catholic history in silly ways she is often asked to speak about all things Catholic and Christian for CBS and CNN.

So here she is, writing about Halloween, WITH A VERY SERIOUS SCHOLARLY THESIS titled,

‘Was Jesus a Wizard?’ Is Actually a Serious Scholarly Question

I know, right?
Clickbait. Here’s the thing. I understand why some writers write silly things in order to get hits but there’s got to be a limit, doesn’t there? Candida Moss would answer that with a clear and resounding “no.”
I’m really not in the mood to really examine this. You know the trick. She just says over and over about what the perception from “some” could be. What, she could say, is wrong? I’m just arguing that this is how some could perceive.

It’s Halloween weekend, when scary but sexy becomes a universally acceptable dress code. Though trick-or-treating may be off the table because of the pandemic, sexy devils, witches, and wizards are still on the sartorial menu. Though the Satanic undertones of Halloween might seem a world away from the pristine piety of Christianity there’s a case to be made that the most famous magician of all time is not Harry Potter or Gandalf, but Jesus Christ himself.

I read it, hoping that, in the end, she’d explain why Jesus shouldn’t be seen as a wizard and why He is different. But sadly, this is how she ended her think piece.

All of which is to say that perhaps Jesus deserves a place alongside all the Halloween costumes of today, be they tasteful or of Tiger King and Karen. After all, and even when socially distanced, who wouldn’t want a guest who can turn tap water into alcohol and multiply the snack options?

Candida Moss is like one of those Bibles that has all the miracles and uncomfortable teachings crossed out. With more pieces and books like these expect to see her on television a lot more talking about why Jesus wasn’t actually born on Christmas as in her brilliant scholarly piece titled:

Did Early Christians Use Psychedelics?

Or you could check out her penetrating piece on analingus in the Middle Ages for The Daily Beast.
Please don’t click on Candida Moss. I fear you’ll just encourage her.