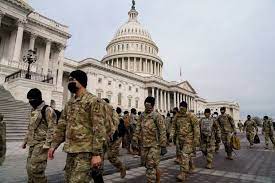 Nothing says “I’m the most popularly elected president in the history of the country” like surrounding the entire Capitol with troops.

“A task force charged with making recommendations to boost congressional security after a deadly Jan. 6 pro-Trump mob assault on Capitol Hill has proposed establishing a permanent military presence ready to go at a moment’s notice in Washington, D.C.

Because nothing says “We the People” like our elected leaders surrounding themselves with troops.

Mind you, our southern border is wide open but if you so much as look at the White House, you’ll have a red laser dot on your chest right quick, you Neanderthal.