All Catholic Schools Take Note of This Case 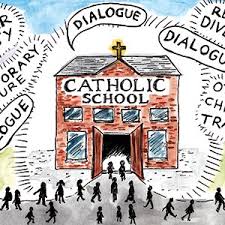 This could spell the end of Catholic schools. I’ll give you some background info. It all comes down to the term “minister.”

Nine years ago, the US Supreme Court ruled that the Establishment and Free Exercise Clauses of the First Amendment bar suits brought on behalf of ministers against their churches, claiming termination in violation of employment discrimi­nation laws. It’s called the “ministerial exception” and states that religious schools can hire and fire for mission because its employees are not merely employees but minsters.

However, Massachusetts’ highest court ruled that the former professor can proceed with her discrimination case against the Christian school because she is not a “minister.”

Gordon College had rightly claimed that all of its employees are “ministerial employees” and thus not covered by anti-discrimination laws. But the unanimous ruling by the seven-member Massachusetts Supreme Judicial Court said that social work professor Margaret DeWeese-Boyd “was not a minister because she did not teach religion, lead her students in prayer, take students to chapel services, deliver sermons, or perform other duties that the U.S. Supreme Court deemed characteristic of that title,” according to SalemNews.

So here’s the deal. The US Supreme Court said in 2012 that Christian schools can hire and fire for mission because of the ministerial exception. This has come under fire from so many lawsuits, looking to find a way to be able to end it. The Massachusetts Supreme Court may have just given them that opening by saying the court gets to decide who a minister is, and not the school.

So, in effect, Christian and Catholic schools would still nominally have a minsterial exception but the courts would get to decide who a minister is.

DeWeese Boyd’s argument is that her role as a social work professor had absolutely nothing to do with religion. If that is true, that is a shame on Gordon College. One thing all Christian schools should be doing to combat this is to strengthen their Christian or Catholic identity. Ensure that ALL professors begin class with a prayer. Make sure that even though they’re teaching something like “social work” they’re teaching it through a Christian lens.

It will protect the religious schools from litigation but also and a little more importantly, it will lead students to Christ which is kind of the point. Unless it’s not. In which case, let the lawyers have at you.