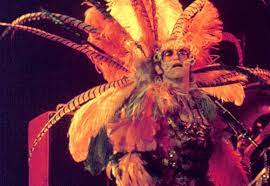 Elton’s got a point.

“How can the Vatican refuse to bless gay marriages because they ‘are sin’, yet happily make a profit from investing millions in ‘Rocketman’ – a film which celebrates my finding happiness from my marriage to David?? #hypocrisy,” Elton John wrote on Twitter, while tagging the Vatican News and Pope Francis.

As you might remember, the Vatican’s financial books kept by the Holy See’s Supervisory and Financial Information Authority, had taken money that had been donated for the poor and invested in other ventures, including Hollywood movies such as Rocketman.

Reportedly, the Vatican’s Secretariat of State reportedly contributed £850,000 toward the biopic, which is roughly 3% of the film’s budget.”

It sure sounds like hypocrisy. If the Vatican is going to support a movie like Rocketman it sends a signal out to many people that the Church supports homosexual unions, doesn’t it?

I’m glad the Vatican did put out a statement saying the Church can not bless same sex unions. Sadly, there were many people who are shocked by this statement because the Church has failed so badly in pronouncing the truth.