Actual headline and story from Slate: “Pfizer Snobs Are Wrong. Johnson & Johnson Is the Coolest Vaccine.” 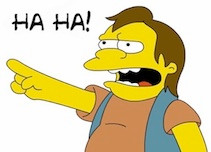 And in case you thought I must be making it up, here’s the link and the pic they used in the piece.

Social media is rife with vaccine braggarts claiming allegiance to #TeamPfizer or the #ModernaGang. You’d think I’d be jealous, since I didn’t get either of those vaccines. I got the vax that youths on TikTok are comparing to a flip phone. But guess what? I’m sitting over here, chuckling at those chumps and their two-shot vaccines. Why? I’m a one-shotter, baby. I received the coolest, the most efficient, the least painful, and the most elite vaccine of all. I’m J&J, all the way.

“Oh, my Pfizer vaccine is cool,” I hear you saying. Let me raise my arm, which only received a single shot so it doesn’t hurt to do so, in order to stroke my chin in thought. What makes a product cool? Exclusivity, of course. The product you covet is the product you can’t get: the limited-run sneaker, the screenprint in an edition of 50, the makeup collection that sells out in an hour. Well, what could be more exclusive than a vaccine that the FDA literally wouldn’t let you take for half of April? (The pause, to check out a rare but dangerous clotting side effect, was lifted April 23; experts suggest that women under 50 who don’t have another reason to take the J&J vaccine and who can access Pfizer or Moderna might want to choose those instead.)

Even before the hiatus, the numbers didn’t lie: When J&J was paused, only about 7 million shots had been given in the United States. That’s basically a limited edition compared with the more than 200 million Pfizer and Moderna shots that have been doled out willy-nilly. Think of J&J as the boutique vaccine, and Pfizer as the Target jab. Sweetie, that shot looks lovely on you, of course, but I’ve heard they’ll give it to just about anyone—even teenagers, ew.

Yet while I bask in my status as a J&J one-shotter, I can also rest assured that my vaccine of choice will, in the long run, drive vaccine equity around the world. One dose, not two, and stable with a regular old refrigerator: That’s why officials are counting on the J&J shot to increase vaccination rates in rural and low-income neighborhoods, and why hundreds of millions of J&J vaccines will soon be delivered to COVAX, the global vaccine initiative. An elite vaccine that somehow is also the vaccine of the people? Mmm, I love that for me.

I kept reading it thinking that it would be a joke eventually but it wasn’t. They had to have been paid by Johnson & Johnson. But even the corporation must have winced when they saw the dumpster fire that Slate just published. I guess Slate is under severe financial distress because they’re now running commercials. Not even good ones. Lame ass promos that would only run on Nick at Nite.

This is the state of modern journalism. These are the people who consider themselves elite. The thinkers of their generation. This is what they think of people though. They think this idiocy will influence you.

You want to know what really scares me? These guys are winning. They’re kicking our butts. Our secular leftist elitist champions dominate the media, education, and the deep state. And what they haven’t taken over they’ve intimidated into doing their bidding. So in the end, we’re so much more pathetic for remaining silent and going along with their asshattery.

Point and laugh at them every chance you get because it will remind normal people that silliness is still silly. It hasn’t gotten the upper hand just because Twitter tells us so. Just laugh at their pathetic attempts and ignore them. And when you can no longer ignore them, resist. But do it with a smile because people must remember that what we’re fighting for are good things, like faith, family, and love.

Laughing at these people will remind them that life isn’t supposed to be such a scoldfest.