Push to Get Justice Breyer to Resign May be Backfiring. 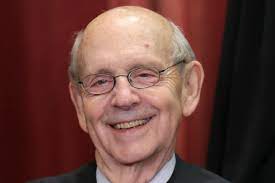 Pro-tip: People who pursued and cherished power their entire lives do not tend to give it up willingly.

You see it chatted about endlessly online. The media is running pieces about it. They want Justice Breyer gone, not because he hasn’t been a strong enough advocate for the left from the bench but because Amy Coney Barrett scares the hell out of them. The left doesn’t want another Ruth Vader Ginsburg situation occurring.

Remember when that woman in the car completely lost her mind when Ruth Vader Ginsburg passed. She wasn’t upset because a woman died. She was upset because Trump would get to nominate another justice.

Now, the NY Times published a piece saying that Breyer probably won’t retire because he’s determined not to let his own retirement be politicized. Hahahahahahaaa!!!! Because we all know how Breyer would hate to politicize the court!!!!

Breyer recently gave a lecture at Harvard and said:

“My experience of more than 30 years as a judge has shown me that, once men and women take the judicial oath, they take the oath to heart,” he said last month in a lecture at Harvard Law School. “They are loyal to the rule of law, not to the political party that helped to secure their appointment.”…

“If the public sees judges as politicians in robes,” he said, “its confidence in the courts, and in the rule of law itself, can only diminish, diminishing the court’s power.”…

In the New York Times, some experts say they don’t think Breyer is going to retire.

That is the thing. When you do what the left wants they will cheer for you but the moment your usefulness to them is done they will seek to turn you in for a newer model. The cheers end when what you can do for them ends. It’s a sad truth.

Stick with people who will pray for you even when you are no longer useful.