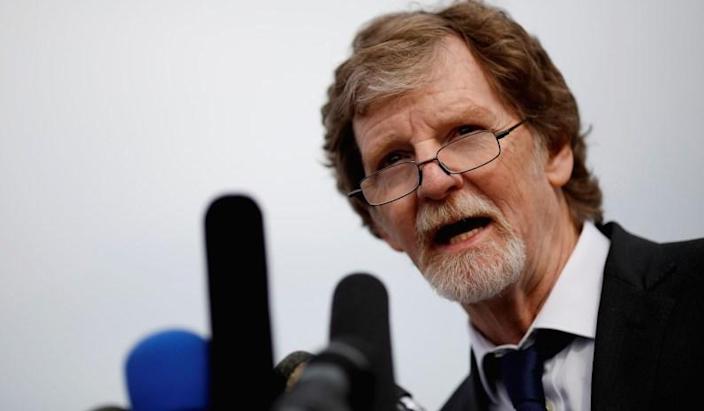 They will not leave this poor man alone. Jack Phillips has likely spent more time in court during the past decade than he has in his bakery.

A Colorado court ruled against Masterpiece Cakeshop baker Jack Phillips, after he was sued for refusing to make a cake to celebrate a gender transition.

Autumn Scardina, an attorney, sued Phillips earlier this year for refusing to bake the cake in honor of Scardina’s transition. Scardina clearly chose this bakery simply to drag Phillips back into court. Despite the Supreme Court siding with Phillips in the past the left will continue to make an example of him, seeking to destroy his life. The thing is that the high court sided with Phillips by ruling that the Colorado Civil Rights Commission displayed anti-religious bias. By ruling this way they essentially sidestepped the issue at the heart of this case which is whether people can refuse service based on their religious convictions.

Thank goodness for the people at the Alliance Defending Freedom who take on these cases.

Who wants a gender transition cake anyway? Is that a thing? I’m thinking like pigs in a blanket or grilled sausages would be more appropriate.

The Denver District Court wrote in its ruling that “anti-discrimination laws are intended to ensure that members of our society who have historically been treated unfairly, who have been deprived of even the every-day right to access businesses to buy products, are no longer treated as ‘others,’”

Attorney Kristen Waggoner of Alliance Defending Freedom said in a statement: “Jack Phillips serves all people but shouldn’t be forced to create custom cakes with messages that violate his conscience. Radical activists and government officials are targeting artists like Jack because they won’t promote messages on marriage and sexuality that violate their core convictions.”

Phillips told National Review in March that it was “worth it to fight.”

“These are important freedoms for everybody, the freedoms that everybody cherishes,” he said. “I’m sure all liberty-loving Americans cherish their right to speak what they want and to worship the way they want . . . and they all deserve the right to be able to work and live according to their conscience without fear of being punished by the government.”

Yeah, that would be nice, wouldn’t it? I mean, this used to be America, right?