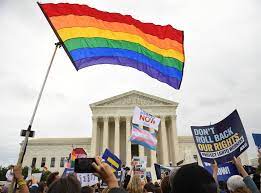 The U.S. Supreme Court declined to hear a high-profile case concerning whether a transgender student was legally entitled to use the bathroom of his choice at school.

This refusal is a huge victory for LGBTQ advocates as it leaves a lower court decision in place that went against the school.

The high court denied the school board’s petition on Monday without explanation. Justices Samuel Alito and Clarence Thomas, however, made clear that they were in favor of hearing the case.

“The school board had argued that the case would give the Supreme Court an “ideal, timely vehicle” to determine whether Title IX applies to discrimination on the basis of gender identity and saying schools dealing with “the question of how best to respond to a teenager who identifies with the opposite biological sex is often excruciatingly difficult.”

“On the one hand, the teenager deserves and needs everyone’s compassion,” the school board wrote in their petition to the court. “On the other hand, allowing the teenager to use multi-user restrooms, locker rooms and shower facilities reserved for the opposite sex raises what this Court has acknowledged to be serious concerns about bodily privacy.”

This was not a school board that was being divisive. The school even offered the kid a private bathroom. They were trying to do what was right for the vast majority of their students. Let’s be honest, this is not an issue that anybody had any issue with up to about five years ago.

The Supreme Court’s punting on this issue could have national implications. Politico called it a “major victory” for transgender rights.

So, other than Alito and Thomas, what happened to the other “conservative” justices? What about the right of our daughters not to have boys entering into the bathroom with them?

The good news is that if Catholic schools have any guts at all, they will stand out like a beacon of sanity in a world drowning in cowardice and virtue signaling.