Dems To Now Focus Exclusively on Ballot Manufacturing, Rather than Candidates 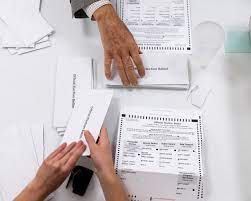 The Democratic Governors Association appears to have designated the 2022 gubernatorial race in Florida as a lost cause and will not give any Democratic candidates looking to defeat Gov. Ron DeSantis any significant financial support, according to The Blaze.

Instead, CMR has learned that the Democrats have come to believe that Democrat candidates often just hurt the party’s chances so they will now be investing exclusively in manufacturing ballots to defeat Republicans, rather than candidates.

“Hey, ballots never say the wrong thing or whisper eerily at weird times so the Party will now be investing smartly,” said one source close to the corruption.

The change in tactics came out of New Jersey (where else?) when State Senate President Stephen Sweeney lost his reelection bid to a truck driver. Even though it was a week after the election, Sweeney told the media “there were 12,000 ballots recently found in one county.”

The change in tactics could change the way elections are run across the country. Some Democrats in Philadelphia were irate that this tactic was being called “revolutionary” as they’ve been running campaigns like this for half a century.