The Hill Thinks ACB Should Recuse Herself from Abortion Case…Because She’s Catholic. 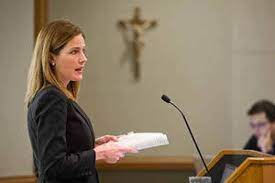 If you intend to create a society without God, you’re just building a new neighborhood in Hell.

The Hill ran a piece saying Amy Coney Barrett should recuse herself…because she’s Catholic. If you’ll recall Senator Diane Feinstein thought the dogma lived a little too loudly in Amy Coney Barrett for her to even be considered for the high court.

Seeing a pattern yet?

When should a Supreme Court justice’s deeply held religious beliefs require recusal – that is, that the justice not participate in a particular case? A difficult question, to be sure, but one that Justice Amy Coney Barrett has already answered for herself. And her answer requires her recusal in abortion cases.

The Supreme Court hears arguments in Dobbs v. Jackson Women’s Health Organization Wednesday, which challenges the constitutionality of Mississippi’s ban on abortions after 15 weeks of pregnancy.

Under current precedent, the law is unconstitutional – as both the district court and the court of appeals held. Both Roe v. Wade, decided in 1973, and Planned Parenthood of Southeast Pennsylvania v. Casey, decided in 1992, hold that a state cannot ban abortions prior to viability, approximately the 24th week of pregnancy. Mississippi has asked the Supreme Court to overrule those precedents.

To follow her own words in a 1998 law review article, Barrett should have recused herself from deciding this case (and all other abortion cases) if she has any integrity at all.

In “Catholic Judges in Capital Cases,” published in the Marquette Law Review, Barrett (then a law clerk to a federal court of appeals judge) and her co-author address the dilemma that faces devout Catholic judges in capital cases. She writes that such judges are “obliged by oath, professional commitment, and the demands of citizenship to enforce the death penalty,” but they are also “obliged to adhere to their church’s teaching on moral matters.” They are therefore “morally precluded from enforcing the death penalty.”

What’s a Catholic judge to do, then? According to Barrett’s article, the judge must recuse herself. She can neither enforce the death penalty and violate her religious conscience, nor fail to enforce it and violate her oath of office.

The writer of this is being too clever by half. This article from the Marquette Law Review clearly says that if the morality of the judge differs from what the law says, then the religious justice must recuse herself. But here’s the thing that The Hill conveniently overlooks – Roe v. Wade is terrible law. It’s not constitutional. So ACB can look at the law and make a decision based on the Constitution, which is, actually the job of a Supreme Court Justice. She doesn’t have to make a ruling based on her religion. It’s a garbage law based on nothing.

The high court is a battleground. Has been for a long time. When the left is winning, whatever the court says is hailed as the law of the land. They yell about “stare decisis” and say the court can’t overturn its old rulings. Who knew leftists were so enamored of tradition?

And when faced with odds they don’t like they simply seek to remove pieces from the board. Your pieces. They don’t want a fight. They want no resistance. And when the fight goes against them, they look to change the rules.

Amy Coney Barrett is on the high court. We shall see how she rules. I have no idea how this will turn out. If we lose, all of us pro-lifers will go right back to work, seeking to defend life.

If the left loses they will seek to discredit the court and then pack the court with their own additional justices. Two more? Four more? However many it takes to end this debate because debate is not what the left wants.

But that’s what happens if Roe is overturned. The great dialogue across the country will begin state by state. And they don’t want you having a say. They will quickly seek an end to the debate. If they don’t get to silence ACB they will silence you.