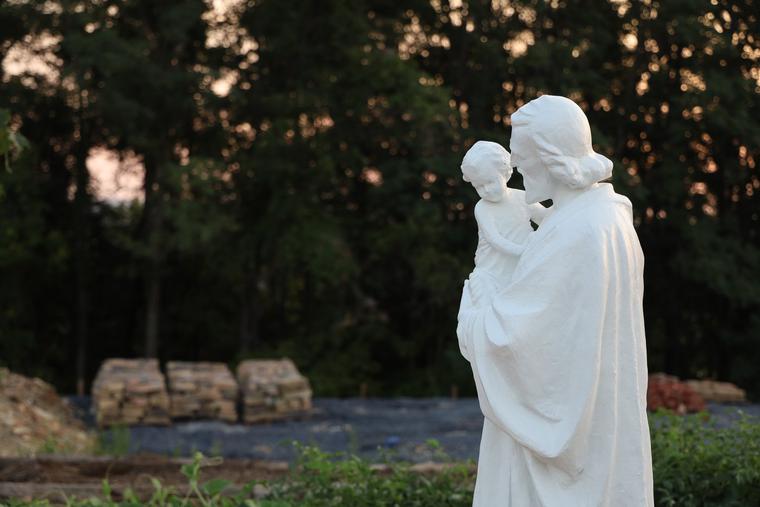 The Discalced Carmelites of Fairfield find themselves in the center of a controversy spawned by the 2018 Vatican document ‘Cor Orans.’

Ten miles from the Gettysburg Battlefield, what appears to be the ruins of a monastery from the Middle Ages, whittled by time to its stone foundations, sits like a plunked-down anachronism in a rural field in Pennsylvania. But these are not ruins. The stones of a new monastery have been laid for months in the cold, hard winter ground of Fairfield, Pennsylvania. The foundation of the chapel is set. The walls of the refectory are rising. Money is being raised, and plans are set to continue the construction of a great stone monastery built to last a thousand years.

The monastery is being constructed of structural stone masonry, timber framing, lime mortar and reclaimed wood. This micro-village will be made up of several smaller buildings connected by covered cloisters, along with a working farm.

This countercultural spectacle of habited nuns walking through a construction site seems like something out of history books, but the Discalced Carmelite Sisters of Fairfield, Pennsylvania, of the Carmel of Jesus, Mary and Joseph, are bucking the trends of modernity.

While so many monasteries and convents disappear due to a lack of vocations, this one was established just 11 years ago as an outgrowth of another Carmelite monastery in Valparaiso, Nebraska, which had grown past its limit of 21 sisters. Due to the increase of vocations, the carmel, with the blessing of the bishop of the Harrisburg Diocese, moved to Pennsylvania in 2009 and to the Fairfield location in 2018.

The Discalced Carmelites of Fairfield live out the centuries-old constitutions of their holy founders, St. Teresa of Ávila and St. John of the Cross. Completely in communion with the Catholic Church, the nuns trace their roots back to 16th-century Spain and 17th-century Mexico. They adhere to the practices of St. Teresa of Ávila, living a life of prayer and sacrifice and eschewing modern conveniences such as electricity or air conditioning. They pray by candlelight, cook with wood stoves, sleep fewer than six hours a night and fast often.

Most importantly, they pray incessantly. Their very lives are prayers. The sisters wear a traditional brown wool habit with a large scapular, a white mantle and black veil. The very term “discalced” means shoeless. They wear hemp sandals of their own making. They attend the traditional Latin Mass, the same one that St. Teresa of Ávila, from whom they take their inspiration, did so many centuries before.

“Living a life of solitude, prayer, and sacrifice, the nuns’ primary mission is to pray for the Church and its priests,” reads their website.

Despite all this, or perhaps because of this, the sisters receive about 100 inquiries per year about possible vocations. There are more than two dozen sisters currently in Fairfield, with others preparing to enter.

“They have my greatest admiration as an authentic monastic cloister community,” he said. “They are the real thing.”

Bishop Gainer described them as a “powerhouse of intercession not just for the Church but for the world.”

“They are truly selfless in that they’re praying for all of us,” he said. “As the heart pumps life blood into the body, these nuns are the heart of the Church; grace can be pumped to the mystical body. They are a great benefit.”

These sisters may seem like something out of the past, but they share a great faith in the future, which is why they’re building a monastery that will resist anything that the outside world can level against it. They do, however, believe that recent internal changes within the Church could pose a very real danger to their existence.