LGBT and Atheists for Life Cheer on Overturning of Roe 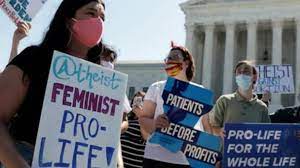 Last night, there was some kind of protest at the US Supreme Court over the Court possibly overturning Roe. The surprising thing is who else showed up. A small (but very loud) contingent of LGBT for Life and Atheists for Life arrived to yell and sing.

Hey, if you ever complain about Church music you should hear this atheist music.

The “LGBTs against abortion” and “atheists for life” counterprotest has arrived pic.twitter.com/PPDhjE90E9

But I am glad to have their support for this crucial issue. I’m not sure I understand it completely, especially with the atheists for life. I mean, in the end, where does the value of life derive from, if not a loving Creator? But I cheer them on because opening one’s eyes to the worth of life can be the kickstart to a full conversion.

I think in the end, if we can stand together on this one issue it gives hope to the country. I mean this in very real terms. I still remember that the Rev. Jesse Jackson showed up to protest Terry Schiavo’s death. He’s said and done a lot of things I disagree with but I’ve always appreciated and respected that he did that, despite most on the left criticizing him for it. But this country would be far different if we could come together on the issue of life.