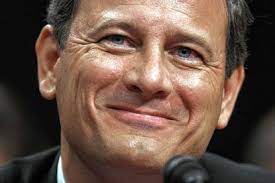 According to Fox News, Chief Justice John Roberts, who reportedly has no spine, still appears set on attempting to persuade Amy Coney Barrett and Brett Kavanaugh to take a more nuanced or perhaps incremental approach to allowing abortion restrictions.

Nuanced means turning their backs on the unborn. Nuanced means he craps his pants when he thinks about bad headlines. It means he is no longer a man but a puppet.

So, while Roberts openly slithers through the hallways of the court, smiling and cajoling, Justice Samuel Alito and his family have been forced into hiding due to concerns for their safety.

But I’m told it’s that nasty right wing violence is the one we should really be worried about?