AP: “SOME” Catholic Abortion Foes Are Uneasy About Overturning Roe 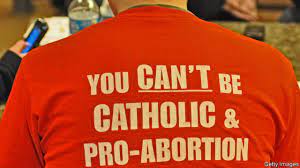 Ah let’s delve into the “Catholic” world that supports Roe v. Wade. What might we discover as we spelunk into this strange worlds.

The very serious and like totally objective article goes out in search of “Catholics” who don’t want Roe overturned. Where might they find these?

Madison Chastain, a Catholic blogger and disability advocate, describes herself as anti-abortion, yet opposes overturning Roe and criminalizing abortions. Factors that cause abortion, she wrote in the National Catholic Reporter, include lack of comprehensive sex education, inadequate health care, and workplace inequalities.

OK. Who was surprised by it being someone who writes for the National Catholic Reporter? Show of hands?

Chastain went on to say, “Making abortion illegal before addressing these injustices is going to kill women, because women will continue to have abortions, secretively and unsafely.”

This is an argument we’ve heard a million times before and it makes no sense. Let’s butcher the unborn safely. Planned Parenthood had absolutely no oversight from government. They are the back alley but a profitable one.

So who else did the AP find when searching for “Catholics” worried about overturning Roe.

Sam Sawyer, a journalist and Jesuit priest, says he is a “dedicated pro-life advocate” who favors Roe’s reversal. Yet he responded to the leak with an essay listing reasons why abortion rights supporters are so alarmed by that prospect.

“The pro-life movement and its political alliances are perceived as a threat not just to abortion itself but also to democratic norms, to judicial commitments to civil rights, and to women’s health and economic security,“ Sawyer wrote in America, the Jesuit magazine for which he is a senior editor.

Republican politicians, backed by anti-abortion leaders, “have used the lives of the unborn as moral cover for ignoring other calls for justice,” Sawyer wrote. “The pro-life movement’s political allies have gutted social safety net programs that would make it easier for women to carry pregnancies to term.”

I’m sure there were many many many abolitionists who, after the slaves were freed, wrote a list of reasons why it’s so problematic that slaves be freed. That sounds logical, right?

Who’d a thunk that the Jesuit, who is totally a “dedicated pro-life advocate” would hate pro-lifers so vehemently, you know, the people who worked for half a century to overturn Roe.

I’ll give the AP some credit. They knew exactly where to find the resistance, huh? They didn’t go to daily Mass. Nope. Jesuits and the National Catholic Reporter. Yup. That’s fair and objective news gathering, right?