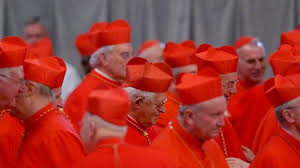 I read many headlines from Catholic websites over the weekend that Pope Francis snubbed Abp. Cordileone by naming San Diego Bishop Robert McElroy Cardinal. But, that’s inside baseball stuff.

At what point does the red hat become something to be avoided? In today’s Church many of us have become increasingly suspicious of anyone who rises in the ranks. To be “skipped over” like Archbishop Cordileone seems to be a badge of honor. The rejected stone and all that.

Here’s what you need to know about Bishop McElroy:

Hmmm. Yeah. So there’s that.

Of course, Archbishop Cordileone last week announced he would bar House Speaker Nancy Pelosi from receiving the Eucharist on account of her public advocacy for abortion.

Justthenews: By naming McElroy as one of 21 new cardinals on Sunday, Pope Francis seemingly passed over the more senior-ranked Cardileone, Fox News reported.

When U.S. bishops were debating whether to change their policy on communion in 2021, McElroy warned against denying the sacrament to pro-choice politicians.

“The Eucharist is being weaponized and deployed as a tool in political warfare. This must not happen,” the San Diego bishop wrote in May of last year for America, a Jesuit magazine.

If I’m facing judgement I’d rather have “standing up for the unborn” on my spiritual resume rather than donning the red hat. In fact, I’d bet that red hat gets pretty darn heavy on judgement day if you don’t live up to it.

My brother Pat wrote yesterday on Facebook, “The Church has reached the point where it cannot be saved by normal human means. That is what I believe God has been waiting for. Now what comes next can never be attributed to anything but Him.”

We are there now. We don’t need to pass go or collect $200. Given the state of the Church today, we can do nothing but speak up in support of Catholic teaching and pray for the Church. The Church has always been in God’s hands. But we could sure use a miracle right now.