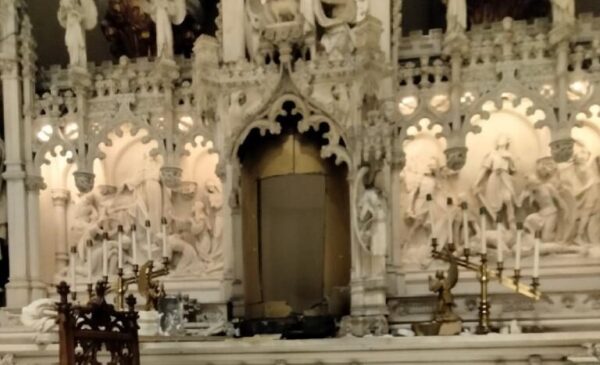 I don’t know what’s going on here, whether it was a hate crime or whether it was just about stealing something of monetary value as the tabernacle itself was estimated to be worth $2 million. The disrespect is obvious.

Bishop Robert Brennan said he was “truly saddened by the news of sacrilege of the Most Blessed Sacrament which took place in one of our churches in the Diocese of Brooklyn.”

How long until all Catholic Churches require guards?

The sacred tabernacle made of silver and gold dating back to the 1890s at historic St. Augustine Parish was stolen in a brazen burglary that left consecrated communion wafers, housed inside, scattered within the rubble.

Father Frank Tumino, pastor of St. Augustine, located at 116 6th Ave., discovered the destruction at the church, which was founded in 1870, around 4 p.m. Saturday while on his way to hear confessions at St. Francis Xavier Parish, a few blocks up the street.

He called the police and an intense investigation ensued. No arrests have been made as of Sunday afternoon.

Father Tumino on Sunday took questions from reporters following the parish’s noon Mass. He addressed the perpetrators of the heist.

“I’d want to say you’ve taken away something that is so beautiful, that has given people beauty in the midst of the ugliness of their lives and times,” he said.

Father Tumino said that as he passed the front of St. Augustine on Saturday afternoon, he noticed one of the front doors slightly ajar, which seemed odd.

“I notice everything,” he said at the press conference in front of the altar. “It’s a curse.”

The pastor described how he went to investigate, but chose to go around to the side and enter through the sacristy. The stench of burnt metal hit him as he entered the sanctuary. Then he saw the tabernacle was missing.

The Eucharist was scattered on the floor and covered in metal shavings and marble dust. The image sickened him to the pit of his stomach, he said.

“This is devastating, as the tabernacle is the central focus of our church outside of worship, holding the Body of Christ, the Eucharist, which is delivered to the sick and homebound,” Father Tumino said. “To know that a burglar entered the most sacred space of our beautiful church … is a heinous act of disrespect.”