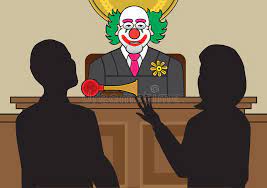 In what world is allowing parents to send their children to schools of their choice, establishing a state religion? In clown world only. Her take is unserious, ill-informed, and discriminatory so pretty much par for the course today.

The wise Latina somehow believes that it should be illegal to allow parents to spend money that was sent to them by the state on educating their children at a religious school.

Sorry. That’s not to be found in the Constitution. Y’know, I kinda’ knew that the left leaning justices didn’t really care about the Constitution but I still thought that they read it once or twice. I guess I overestimated.

Justice Sonia Sotomayor, the Supreme Court’s most outspoken liberal, accused the court’s six-member conservative majority of eroding the barrier between church and state on Tuesday by striking down a Maine policy that barred religious schools from receiving taxpayer-funded tuition aid.

“This Court continues to dismantle the wall of separation between church and state that the Framers fought to build,” Sotomayor wrote, dissenting from the 6-3 decision that broke along ideological lines.

“In just a few years, the Court has upended constitutional doctrine,” she added, “shifting from a rule that permits States to decline to fund religious organizations to one that requires States in many circumstances to subsidize religious indoctrination with taxpayer dollars.”

Here’s what the ruling really does. It prevents the state from discriminating against religious schools, which was, in fact, what was going on here.

The state of Maine offers school-age children the right to free public education but because some rural areas lack a public high school, students were offered a certain amount of money that could go towards their tuition at a private school. But Maine prohibited families from choosing religious schools because they’re icky and religious.

Leftists argued that the government can’t fund the Church because that establishes a state religion.

Wait, what? I think you have a surplus of stupid in your brain because it’s leaking out your mouth.

To be clear, the state is giving the money to the parents who are then deciding where to send their children. Telling the parents where they can and can’t spend their money is insane and discriminatory.

Consider this decision a win for religious freedom and for education. It is a blow against discrimination. Let’s hope it has some national impact where families can send their children to the school of their choice.