They’re Not Just After Churches and Crisis Pregnancy Centers, They’re After You 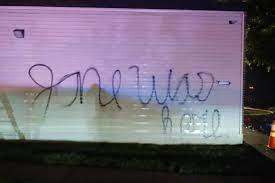 Churches and pro-life crisis pregnancy centers have come under attack recently by pro-abortion radicals. These attacks have been met with shrugs from politicians, law enforcement, the media and to some level, the bishops themselves who’ve only issued some strongly worded press releases in response.

Remember Donald Trump, on the day the Dems voted to impeach him, he tweeted, “They’re not after me they’re after you. I’m just in the way.”

In much the same way, churches and pro-life crisis pregnancy centers are the outward signs of faith to the outside world. The left isn’t just after them. They’re after you.

The pro-violence leftist group (is that redundant?) Jane’s Revenge is literally calling for “A Night of Rage” should Roe be overturned. Who will that rage be directed towards?

If you’re not being attacked, they don’t view you as a threat. Be a threat.