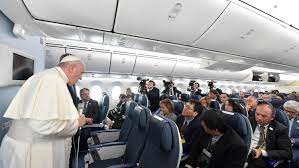 Pope Francis spoke on a plane. You know what that means. It means some crazy stuff got said.

It doesn’t matter what this pope gets asked, he always brings it around to his belief that traditional Catholics are holding us back or are too judgey or something like that. But on the plane this time he might’s gone further:

A Church that does not develop its thought in an ecclesial sense is a Church that goes backwards. And this is the problem of so many who call themselves traditional today. They are not traditional, they are “indietrists,” they are going backwards without roots — “That’s the way it has always been done,” “That’s the way it was done in the last century.” Indietrism [looking backward] is sin because it does not go forward with the Church. And instead, someone described tradition — I think I said it in one of the speeches — as the living faith of the dead and instead for these “indietrists,” who call themselves “traditionalists,” it is the dead faith of the living.

Tradition is the root of inspiration to go forward in the Church, always these roots, and “indietrism,” looking backward, is always closed. It is important to understand well the role of tradition, which is always open like the roots of the tree. The tree grows like that, no. A composer had a very beautiful phrase — Gustav Mahler — said that tradition in this sense is the guarantee of the future, it is not a museum piece. If you conceive tradition as closed, this is not Christian tradition. Always it is the root substance that takes you forward forward forward. That’s why what you say above thinking, carrying forward faith and morals, while going in the direction of the roots, of the substance goes well with these three rules I mentioned of Vincent of Lerins.

And now, according to this video, Pope Francis just shut down an order of Novus Ordo nuns because they looked too traditional and practice adoration.

This pope is at war with Catholicism as I’ve understood it for years. He’s also toying with the idea of changing the Church teaching on contraception. This would be a disaster.

But this is not about Pope Francis. This is about a leftist takeover of the Church. Let’s be clear, if Pope Francis was gone tomorrow, I don’t think it would make a difference. The Church would continue in this direction no matter what.

We must pray for some supernatural intervention. That is the only thing that can save the Church from its cardinals.