The Man Who Saved Billions and Killed Millions 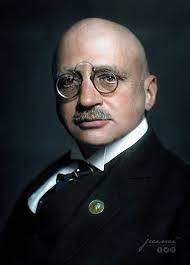 Fritz Haber is the scientist who arguably most transformed the world. Maybe. But there’s a couple of reasons I’m sharing this. One, it’s a fascinating story that isn’t all that well known, which is to say I’d never heard of it.

Secondly, it is a perfect encapsulation of scientism and utilitarianism. This is where you get to without Christi guiding your actions. You get caught up in your own pride of discovering something and seeing it used and you end up playing ridiculous moral games in which you weight the body count on one side of your decision and the body count on the other and forge ahead as if life and morality could be weighed as easily as that.

This man might very well have believed that this invention for the war effort would’ve saved lives by ending the war more quickly. So is it the right decision?

Western culture is running headlong away from Christian morals. What replaces it? Paganism. Scientism. Utilitarianism. This is where we’ve been and this is where we’re heading.