Pick Which One You’d Rather Have as Your Neighbor. 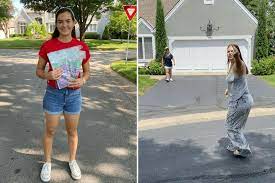 Which world would you rather live in? Which one would you want your daughter to hang out with or your son to date? Hmmmm….

The Daily Wire reports what happened between these two:

A pro-life teen volunteer was physically assaulted and harassed on Sunday while she was canvassing in Kansas for an upcoming ballot initiative concerning abortion, the teen claims.

Grace Hartsock, an 18-year-old volunteer with Students for Life Action, says a woman inside one of the homes she canvassed chased her, shoved her in the chest, repeatedly punched her in the head, and cussed at her. A police report has been filed.

“It’s unfathomable that the pro-choice movement claims to be ‘pro-woman’ and yet attacks women who don’t agree with their narrative,” Hartsock said in a statement. “It’s not surprising to me that a person who advocates for violence in the womb wouldn’t hesitate to attack a pro-life woman like myself.”

In a blog post at SFLAction, Hartsock recalled stopping at a home where a woman politely told her, “No, I’m sorry, I don’t think you want to talk to us.”

Before Hartsock turned away, the teen heard another voice from inside the house yelling expletives. “Don’t apologize to her, mom,” yelled the woman, who is presumably the daughter of the person who answered the door.

When Hartsock went to leave, the woman yelling at her allegedly ran out of the front door and began chasing the pro-life activist.

“The woman shoved Hartsock in the chest with both hands and began hitting her in the head with closed fists. Hartsock attempted to protect herself and leave while the resident’s mother told her daughter to stop the violence,” the SFLAction post details.

“Hartsock told police that as she made it down the driveway to get distance from the irate pro-abortion supporter, the daughter threw a piece of food that hit her in the face, and she followed Hartsock down the street screaming curses and phrases such as, ‘I hope you get raped,’ and ‘I hope you get run over by a car,’” the post added.