Girls HS Volleyball Team Locked Out of Locker Room Because They Didn’t Want to Change in Front of Trans Student. 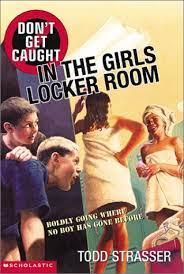 This makes sense. A team of high school girls are uncomfortable changing in front of a boy so they’re all punished.

This insanity is brought to you by the LEFT. The school is actually investigating the girls for harassing the boy who’s insisting on changing with the girls and making them uncomfortable. I for one am proud of these girls for standing up to this bullying from their school. They’re the sane ones here. Good for them.

Two Vermont high school girls did what few of their peers have dared: When a biological boy who identifies as a transgender girl entered their locker room, they asked that student to leave.

The Randolph, Vermont-based Randolph Union High School told the community in a Sept. 23 email that it is “launching a harassment investigation” —apparently into the girls’ conduct rather than the 14-year-old trans-identify student’s behavior, parents suggested. The Daily Signal has chosen not to name these students due to their youth, though local outlets have reported some of their names.

Since then, The Daily Signal has spoken with a number of parents who are outraged that the school and Orange Southwest School District allowed such an incident to occur. These parents do not want biological boys in their daughters’ locker rooms, and they are bewildered as to why the school system apparently prioritizes the needs of students who identify as transgender over the needs of their daughters.

“We allowed a child who is biologically the opposite sex, male, go in a locker room where biologically girls were getting fully changed,” one of the girls’ mothers told The Daily Signal. “The biological child was not changing and sat in the back and watched girls getting changed. That made girls feel uncomfortable, made girls feel violated and not protected.”

“When parents and kids went to the school principals they were told it was a law—nothing they could do about it,” she added. “The law gives them room to protect all and they did not.”

Beginning Friday afternoon, The Daily Signal has unsuccessfully attempted to reach the student who identifies as transgender or the student’s mother via social media and email.

Girls Speak Out
Female student A, who is 14 years old, told The Daily Signal in a phone interview that she was dressing for a game when the trans-identifying student began to enter the locker room. She shared that she was not wearing a shirt, only a bra, and was halfway through putting on her shorts.

“Please don’t come in here, we’re still changing,” she says she called out, as she struggled to clothe herself.

But the trans-identifying student allegedly told her that it was fine, entered the locker room, and stood in the corner “watching” as the other girls finished dressing. Female student A said that the interaction made her incredibly uncomfortable, and her mother compared the incident to “voyeurism” in a phone interview with The Daily Signal.

Asked why she took issue with the trans-identify student entering the bathroom, female student A answered slowly, as if surprised she must explain: “It’s a dude.”

“He was born a boy,” she said. “I don’t care if he’s on my team, he can join any team, I don’t care. But when I’m undressing and there’s a male in the girls locker room or in the bathroom with me, I feel very uncomfortable.”

Female student B told The Daily Signal in a phone interview that she also unsuccessfully told the student that identifies as transgender that the girls needed their privacy.

“I think everyone feels this way about going into a locker room, you shouldn’t be uncomfortable,” said female student B, who is also 14. She joked that since all the girls have the same body parts, they are comfortable changing around one another. “But then when [the trans-identifying student] comes through, it doesn’t feel that way. It’s like, a male is in here. Everyone feels so awkward.”

Female student B said that though she asked the trans-identifying student to leave the locker room, the student stayed. When she and her fellow teammates tried to bring the matter to school officials, she said, they were told that they had to comply with state law (which allow students to use bathrooms and locker rooms corresponding with the gender they identify with).

Most of the girls’ teammates agreed that biological boys should not be allowed in the girls’ locker rooms, both female students told The Daily Signal. Female student A said that she only knew of their two volleyball teammates who said they were fine with the student who identifies as transgender being in the locker room while they changed.

“Everyone was telling me they were happy that I did the thing on the news to get awareness about it,” female student B said, referencing an interview she did with a local outlet. “They don’t like it either.”

But female student B said that on Thursday, during a math class, some of her friends showed the news hit to the trans-identifying student. According to female student B, the student allegedly reacted to the video by allegedly saying, “I’m going to f—ing kill someone,” before allegedly adding, “I f—ing hate” female student B.

Female student B said she headed to the principal’s office as soon as she heard what the trans-identifying student had allegedly said. Co-principal Lisa Floyd reportedly told her that the school would conduct a threat assessment, she said, police arrived, and she was ultimately sent back to class (Floyd did not address The Daily Signal’s request for comment on the trans-identifying student’s alleged remarks but stressed that “student safety is our District’s highest priority”).

On Friday afternoon, the girls said, both female student A and B played in their volleyball game with the trans-identifying student.

In a comment on a local outlet’s Facebook post about the incident, a woman who claims to be the trans-identifying student’s mother denied that any such comments were made.

“I am the mother of the trans student in question and my daughter did not make any comments at all. The entire team can back this up, other than the girl that made up the story for attention,” Facebook user Mo Sivvy posted (she did not immediately respond to a request for comment).

“This is slander, defamation of character, and we have secured a lawyer,” the comment continued. “My daughter has no interest in anything other than being accepted for who she is and playing volleyball. What inappropriate comments would she have made, I’m curious? This is outrageous. The ACLU has been enlisted. There will be a thorough investigation and truth will prevail.”

The ACLU did not immediately respond to a request for comment from The Daily Signal.

The School’s Response
The Daily Signal questioned authorities and school officials about the trans-identifying student’s alleged conduct and remark. Orange County Sheriff William Bohnyak told The Daily Signal on Friday evening that the “incident is currently under investigation,” noting that “we are working with school officials and parents to make sure all are safe.”

In a Tuesday email to families, co-principals Lisa Floyd and Caty Sutton as well as Athletics and Activities Director Nick Bent announced that the locker room would be closed to all volleyball players until further notice.

“We do not make this decision lightly, but we believe it is the right decision at this time,” the email said, encouraging volleyball players to come to school dressed for their game or prepared to change in another space.

Wait a second. I was told that the left is all about protecting women and applauding them for speaking their truth. Oh but not if their truth is ACTUAL TRUTH. If they don’t bend the knee to the LGBTQRSTUV agenda then it’s shut up girl time.

So much for female empowerment. To be clear, the school is taking the side of a boy who wants to watch girls change in their locker room. And when they get upset about this they’re told that they’re not as important as the confused boy.

My only hope is that this insanity wakes parents up. If it doesn’t there is truly no hope.