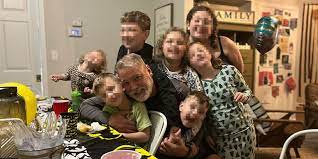 This is insane that this is even coming to trial. This is head on a pike politics at play. The message is “this is what we do to pro-lifers” in this country so beware. They’ll raid your home with drawn weapons. They’ll drag you off in front of the media, and they’ll put you on trial. And yes, they will even try putting you in jail.

CBN – Jury selection begins Tuesday in a trial that Mark Houck’s attorneys say could have major implications for how pro-life supporters are allowed to try and advance their message.

Houck’s case has drawn national attention, given the circumstances of his arrest last September.

In an early morning raid at his home, federal agents took Houck into custoday nearly a year after he and Planned Parenthood volunteer Brice Love got into a physical altercation outside a Philadelphia abortion clinic. Houck’s attorney, Peter Breen, says his client was targeted for his pro-life advocacy.

“Mr. Love had brought a private criminal complaint in the municipal court, and that case was thrown out because Mr. Love didn’t show up for court twice,” Breen said. “That is where the matter should have ended, except the Biden administration wanted to make an example out of Mark Houck.”

Part of the Justice Department indictment alleges Houck attempted to “injure, intimidate, and interfere” with the Planned Parenthood volunteer because the organization was providing reproductive services. The DoJ calls it a violation of the Freedom of Access to Clinic Entrances (FACE) Act. If convicted, Houck could receive a maximum of 11 years in prison and a $350,000 fine.

Houck, a Catholic sidewalk counselor, maintains he was protecting his son from a verbal assault from the volunteer.

Please remember, these charges were tossed in the municipal court. The Biden Administration literally made a federal case out of this. Please pray for Mark Houck and his family. Pray that other pro-lifers are as courageous as them.

Breen explained, “Look, if this is allowed to stand, it’s an invitation for abortion escorts to be very aggressive, because who’s the Biden administration going to believe: the abortion escort or the sidewalk counselor?”

Houck’s defense argues that the FACE Act was never meant to cover volunteer abortion escorts, only clinic patients and personnel.

“We’ve told the court that Mark is going to testify; the defendant, he is going to take the stand, we intend to put him on the stand, and his son is intending to testify to talk about what he saw that day,” Breen said. “So it’s a big case when I say, it’s the biggest criminal case in the pro-life movement in my memory.”

Houck’s attorneys hope to have a fairly quick resolution to the trial and there could be a decision by the end of the week.