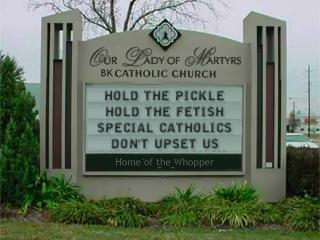 Well, it seems our favorite Burger King Catholic, the openly gay ex-governor of New Jersey has applied to the General Theological Seminary in Manhattan in order to become an Episcopal Priest. Once again, you just cannot make this stuff up. WNBC reports the following:

“I’m so excited about it,” McGreevey told WNBC.com’s Brian Thompson.
…
Friends of the former governor told NewsChannel 4 that McGreevey has wanted to enter the priesthood since his days in high school, college, and even law school. Now, the friends said, McGreevey has the freedom to do it.

The governor’s friends added that once McGreevey finishes the four-year ordination process, he hopes to find a parish — perhaps in an inner-city neighborhood, where he can help children or the poor.
…
The former governor, who was raised as a Roman Catholic, was officially received into the Episcopal religion on Sunday at St. Bartholomew’s Church in Manhattan, said the Rev. Kevin Bean, vicar at St. Bartholomew.

We blogged about the good governor just last week when he wrote to the New York Times magazine criticizing the Catholic Church for being “unwilling to suffer dialogue internally on issues of the day, including abortion, priestly celibacy, gay rights, etc.”

At that time we called him a Burger King Catholic because he wants his Catholicism served “his way”.

Well, it seems he has gone one better and found a new home in the Episcopal Church. Well, one would now expect a lot more Episcopal parishes to defect to Nigeria. They say any publicity is good publicity, but I am not sure that the Episcopal Church in the U.S. would agree with that today. We will keep you posted.