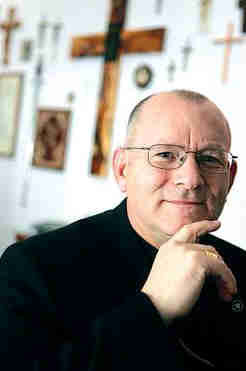 The Bend Bulletin of Oregon has an interesting article on Bishop Robert Vasa of the Diocese of Baker in eastern Oregon.

It is too long an article to reproduce here, but it is well worth the read. I would like to just quote some of the more interesting excerpts and quotes.

Bishop Vasa on his “controversial” orthodoxy:

“I as a teacher have an obligation to say these are not opinion, they are our teachings and are part and parcel of the Catholic Church,” he said. “These are things which stem directly from God himself.”

On the value of a Catholic education:

Get on board or get out:
On his insistence that lay ministers sign on the dotted line an affirmation of personal faith which outlines standard and widely accepted church doctrine. Among other things, it asks lay ministers to affirm that they believe the church’s teachings about the sinfulness of contraception, the evil of homosexual acts, the rejection of abortion and euthanasia, obedience to the church and the literal presence of Jesus Christ in the Eucharist (the wine and bread, or blood and body, of Communion).

The list (in the affirmation) is taken in some circles as the church’s suggestions,” Vasa said. “Whether we feel it’s right or not, the church holds these up as the standard we ought to hold and strive for.”…“We live in an age where the only acceptable virtue is tolerance,” he said. “Unfortunately, it’s a popular mantra that you must not only tolerate what that person does, but you must positively accept it. But to live with integrity, we must not go there.”

On his boldness as Bishop:

“I pray that I do what God wants me to do and I stay out of God’s way. Being given a bias for action can be a dangerous thing because it can tend to displace God. Hopefully, I’ve found a kind of holy boldness.”

Richard Thorne, a member of the diocese, has this to say about his Bishop:

“He stands his ground,” Thorne said. “It’s hard to continue saying there are absolutes in a world that is taught there’s no such thing as absolutes. I wish more bishops had the spiritual testosterone that he has displayed…Wow”