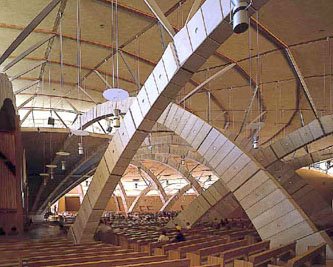 The London newspaper, the Independent, reports that Monsignor Gianfranco Ravasi, the president of the Pontifical Council for Culture, claims that the Church “is searching for rich patrons to sponsor works in new houses of worship designed by cutting-edge architects.” The problem, he claims, is that the Church no longer has sufficient sway in the world of cutting edge art, so it is setting up a committee “to find ‘world-famous’ contemporary artists it can commission to produce new religious and spiritual works.”

Apparently, Monsignor is quite happy with the “magnificent new churches” like “Renzo Piano’s Padre Pio Pilgrimage Church in central Italy and Richard Meier’s Jubilee Church in Rome” (both shown here ). What they need is modern art to go in the modern churches. “We are looking for world-famous people,” Monsignor Ravasi said.

One of the sculptors Monsignor says is the kind of artist he is looking for is Anish Kapoor, whose large red blob shown here was specially made for the Nantes (France) Museum of Art. The description of the project reads:

“the work is made up of a huge, moving red-wax block, slowly going through the museum, from the entry hall to the deep end of the patio, on rails placed at 1.50m high above the ground. This heavy wagon, moving very slowly between the too narrow arches of the patio, rubs off, leaving dramatic scraps of red wax on to the pillars. It is an allegory of memory and history, two themes in the very heart of the museum function.”
There is a major problem here. When a patron decides that getting a “famous” artist is more important than one who understands the sacramental nature of Catholic art, the ingredients are prepared for a debacle. It happened when Paul VI tried to do the same thing.

I’ll let Orthodox Christian theologian Leonid Ouspensky give the critique, from his book The Theology of the Icon. It comes from an outsider looking in, and could hardly be more true:

…The Roman Church therefore appeals to the most famous or contemporary painters to decorate its churches, without being in the least concerned if they are believers or atheists. How can there even be a question of intercourse between the image and the word of Scripture when the person who decorates a church or paints a sacred image is an atheist?… Even to preach a sermon–something much less important in the Church than an image–one would not invite someone of a different religion or an atheist simply on the grounds that he is a brilliant speaker. But this is being done in the field of art. This shows the extent to which the very meaning of the sacred image has been lost in the Roman Catholic Church.

To reach the Pontifical Council for Culture, e-mail: cultura@cultura.va.