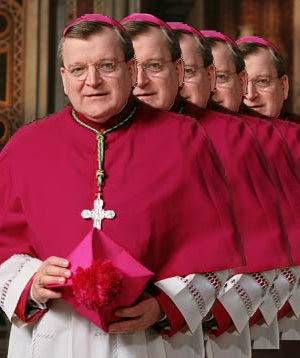 I am hereby demanding a change in one of the key bioethical stances of the Catholic Church.

I do this because I’ve noticed that all dissenters never “ask” the Church to reconsider her stance on things. Us dissenters “demand change” and insult the Church for not doing exactly what we say.

My demands are as follows: The Catholic Church must allow cloning. Not even for everyone. CMR just wants to clone Archbishop Raymond Burke, prefect of the Vatican’s highest court. I intend to clone a bakers dozen of Burkes and have them replace other Archbishops and Cardinals in select areas (you know the ones).

Now I’m a reasonable man and understand that it may take some time for the Church to reconsider its prohibition on cloning but it’s OK because I need some time to secure funding and possibly build a laboratory somewhere in North Korea.

Unfortunately, from what I understand, Abp. Burke is clearly and squarely with the Catholic Church on life and bioethical issues, and he likely wouldn’t allow himself to be cloned.

Abp. Burke gains our respect every time he speaks. Yesterday, he was quoted as saying the Democratic Party “risks transforming itself definitively into a ‘party of death.'”

Many in the media are shocked at Abp. Burke’s statements. I too am shocked but only because he said the Dems “risk” transforming themselves into the party of death. To me, the transformation is complete. That party has embraced the culture of death as a sacred right (and not one of those little rights that can be taken away like the Second Amendment.)

Burke said the new Democratic Party isn’t the same as the one supported by generations past.

He told the paper it was once “the party that helped our immigrant parents and grandparents better integrate and prosper in American society. But it is not the same anymore. Burke also lamented that pro-life Democratic leaders are “rare, unfortunately.”

The Catholic News Service also indicates Burke talked with the newspaper about the abortion-communion debate within the Catholic Church and said he wasn’t an isolated position.

“It was shared by Archbishop Charles J. Chaput of Denver, by Bishop Peter J. Jugis of Charlotte and by others,” he said.

“But it is true that the bishops’ conference has not taken this position, leaving each bishop free to act as he believes best. For my part, I always have maintained that there must be a united position in order to demonstrate the unity of the church in facing this serious question,” he added.

CMR has long appreciated Abp. Burke’s efforts, especially on life issues. But we think it’s time we took it to the next level. There are way too many bishops, archbishops, and Cardinals who are…shall we say…a little squishy on many issues.

Archbishop Burke has shown himself to be a leader by his regularly courageous stances and that’s why CMR labs intend to clone him once the Church gets out of the Middle Ages and allows us to clone Abp. Burke. If you’re interested in helping us please send checks or money orders to CMR Labs at an undisclosed location in North Korea. Send lots because beakers and bunsen burners don’t exactly grow on trees, you know.