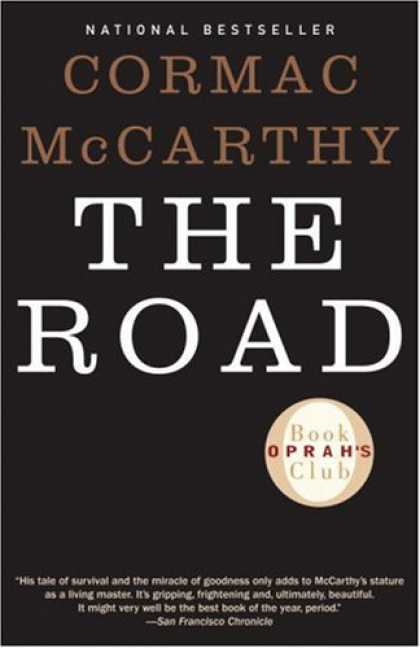 If you have the time to read one book in the near future, consider Cormac McCarthy’s The Road, even though it was recommended in Oprah’s book club. In secular literary circles, McCarthy is understood as a social critic whose books are violent, apocalyptic and dark. They see McCarthy in the predictable lens of the politically correct concerns of dilettante academics and ignore his deeply Catholic message.

Many who understand McCarthy’s Catholic side have compared him to author Flannery O’Connor, whose deeply expressionistic books have been praised for their use of shocking darkness to wake complacent readers out their sleep of secondary concerns. But I have to say, the Flannery O’Connor method never really worked for me–I have almost always found it a distraction from the good Catholic message that lay behind it. I found McCarthy’s No Country for Old Men a great read, but its violence was so off-putting to me, especially on the screen, that its Catholic apocalyptic message was lost behind the shock. The violence only seemed to harden me more and more to violence rather than awaken me to its terribleness.
The Road was for me something altogether different.
It is bleak and dark for sure, and the threat of violence is always present. It presents a view of the world without grace, or at least without the abundance of grace we have now. But though it is a long meditation on death, actual blood-shedding violence is rare and it keeps alive an ember of hope in which I found great comfort.
A bit of the plot: because of some unnamed disaster, all of the plants and animals of the world have been incinerated, and the few surviving humans have been reverting to their animal nature of me-first violence. The earth is no longer “hospitable” to humanity (interestingly, “hospitable” is a term often used to describe the quality of the renewed world after the sacrifice of Christ tore the veil and the Holy Spirit flooded into it). Color, pleasure, sunshine and relief from the cold are nearly impossible to find. In this situation, the most God-like qualities of humanity’s imago Dei are almost completely wiped out: order, political life, justice, charity, cleanliness and nearly all of the traits of “high” culture like art, music, poetry, literacy and even agriculture.

The book hearkens back distinctly to the “Number of the Beast”– 666– to the sixth day of creation, the day when humans-as-animals were made, the day before the 7th day (the sabbath) and the 8th day (the peace of eternity of grace after the Resurrection). The Road is decidedly a movie about what happens to humanity when it reverts back to its fallen, beast-like 6th day.

It is ugly indeed.
In a poignant reminder of what is lost in a world without even simple grace, McCarthy allows his 2 main characters, who had been wandering in the burned-out forest filled with robbers and starvation, to stumble upon a bomb shelter stocked with food and fuel. They get to take a hot bath, shave, drink coffee and eat bacon. They even find a book. In this simple vignette, one would think they had found Eden once again. The reader feels it in the literary relief from the bleakness of the rest of the book. It made me realize how quickly I forget the tremendous blessings of my own life.
So if you get the chance, take the time and read The Road. It will put in perspective the many blessings we all have, despite the world’s many problems. And read it like a Catholic. When the movie comes out sometime in 2009, be ready to tell family and friends that The Road is not primarily about global warming, but about the Divine Life that sustains us and where we would be without it.