More than Judy Garland: The Political Meaning of the Wizard of Oz 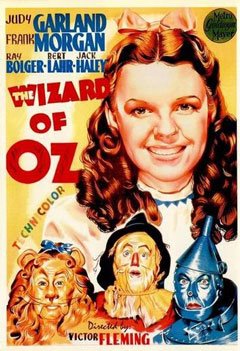 Recently I recalled that years ago in college one of my professors mentioned something about the Wizard of Oz being more than a children’s story and also more than a cool visual to go with Pink Floyd’s Dark Side of the Moon….something about monetary policy, blah, blah. Recently in a discussion with friends something allowed me access to this long forgotten part of my brain, and when I brought the topic up I was roundly ridiculed. As usual, Google comes in handy in situations like this, and I found the following exegesis on The (Wonderful) Wizard of Oz which can be read in its entirety along with another interpretive essay by clicking here.

“The Wonderful Wizard of Oz by L. Frank Baum (Chicago, 1900) is a parable about Money Reform and the 1890s Midwestern political movement led by William Jennings Bryan (1860-1925)… From 1891-1895 Bryan served in the House of Representatives, where he advocated the coinage of silver at a fixed ratio with gold, in order to break the bankers’ monopoly and manipulation of the gold-backed currency.

Bryan and his supporters accused Eastern banks and railroads of oppressing farmers and industrial workers. Bryan believed that a switch to silver-backed currency would make money plentiful. …In 1896 Bryan delivered the following words at the Democratic National Convention: “Having behind us the producing masses of this nation and the world, supported by the commercial interests, the labouring interests, and the toilers everywhere, we will answer their [i.e. the bankers’] demand for a gold standard by saying to them: ‘You shall not press down upon the brow of labor this crown of thorns; you shall not crucify mankind upon a cross of gold.'”

Although only 36 years old, this speech resulted in his nomination for the presidency. He contested, and lost to, William McKinley. He stood again for the Democrats in 1900 and 1908, losing both times. Carroll Quigley wrote about the 1896 Presidential election in Tragedy and Hope: A History of The World in Our Time (MacMillan, 1966, p. 74): “Though the forces of high finance and of big business were in a state of near panic, by a mighty effort involving large-scale spending they were successful in electing McKinley.” L. Frank Baum was editor of a South Dakota newspaper and he wrote the first of his Oz series on Bryan’s second attempt in 1900.

Oz is short for ounce, the measure for gold and silver. Dorothy, hailing from Kansas, represents the commoner. The Tin Woodsman is the industrial worker, rusted as solid as the factories shut down in the 1893 depression. The Scarecrow is the farmer who apparently doesn’t have the wit to understand his situation or his political interests. The Cowardly Lion is Bryan himself; who had a loud roar but little political power.
The Good Witches represent the magical potential of the people of the North and the South.
After vanquishing the Wicked Witch of the East (the Eastern bankers) Dorothy frees The Munchkins (the little people). With the witch’s silver slippers (the silver standard), Dorothy sets out on the Yellow Brick Road (the gold standard) to the Emerald City (Washington), where they meet the Wizard (the President), who appears powerful, but is ultimately revealed as an illusion; the real Wizard being just a little man who pulls levers behind a curtain…

When the real Wizard is exposed, the now enlightened Scarecrow denounces him. Dorothy drowns the Wicked Witch of the West (the West Coast elite); the water being an allegory for the Midwest drought. The real Wizard flies away in a hot-air balloon, the Scarecrow is left to govern the Emerald City, the Tin Woodsman rules the West, and the Cowardly Lion returns to the forest where he becomes King of the Beasts after vanquishing a giant spider which was devouring the animals in the forest. Dorothy’s silver slippers were changed to ruby in the 1939 film.”

So there it is. Wait ’til you hear my theory that Mary Poppins was a Communist (really!)