You Cast Sarah Palin: The Movie! 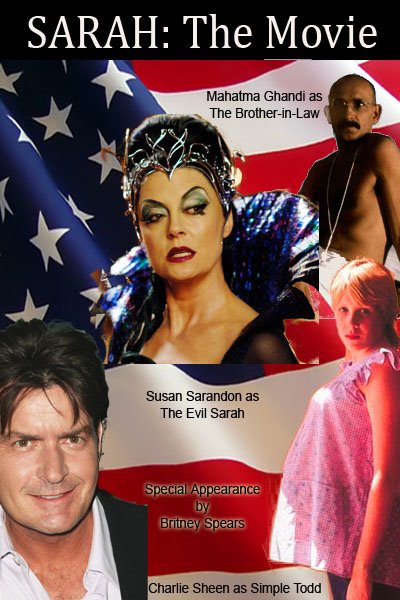 In the great tradition of making movies that offend half the country, Hollywood is now considering making a movie about Sarah Palin.

You just know this will be a fair and even handed, even loving portrait of the woman. A real Frank Capra-esque story, right? Or not.

According to Hollyscoop, a couple of top Hollywood writers are penning scripts for a possible movie about Sarah Palin.

And these aren’t just any old writers. They’re Dustin Lance Black who wrote Oscar-nominated Milk, and The Visitor scribe Todd McCarty. But the two have very different visions for the movie. Black wants to focus on the humorous aspect of Sarah Palin, while McCarty wants the movie to center around Bristol Palin and her boyfriend, and their surprise pregnancy.

McCarty says, “This young man gets his girlfriend pregnant and ends up on the Republican platform at the National Convention. There’s a dark comedy there somewhere. He was like a deer in the headlights.”

O.K. Let’s get the whole double standard thing out of the way. Let’s remember that Obama’s children are off limits but Hollywood can make satirical movies about Sarah Palin’s children.

But we know that already. So if Hollywood’s intent on going ahead with it, let’s start with casting.

A) Ashley Judd – She’s kinda purty. Very liberal. Hates Sarah. She plays dumb very well no matter what role she’s in. And at this point in her career she’ll work for minimum wage. She seems to fill all their qualifications.

B) Susan Sarandon – May require soft focus but she hates Sarah.

C) The chubby Dixie chick Natalie Maines – It could be a musical -if you like banjos.

Todd Palin:
Actor Qualifications: Manly, dumb as a box of rocks, must be able to play angry because he secretly hates his wife, Sarah.

A) Josh Brolin – Kinda’ manly. Hates George W. Bush so you can figure he hates Sarah.

C) Charlie Sheen – Say what you will about Charlie, the man brings the dumb.

Sarah’s brother in law,
Qualifications: Peace loving peace officer who just wants peace with the vicious Sarah and her out of control husband.

A)Ben Kingsley (because he played Gandhi)

And here are some working Titles for the Sarah Palin movie:
You Betcha’
With a Wink and a Smile
How to Ruin a Campaign in Ten Weeks
Troopergate! (If Oliver Stone directs)

We’d love to hear your casting suggestions. Chime in.