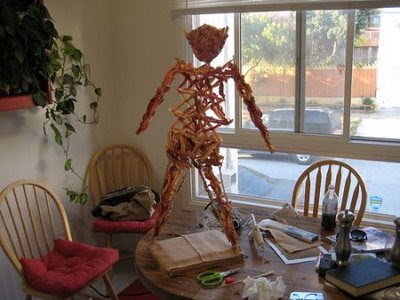 Things have gotten so bad that there is a guy who is eating bacon, and only bacon, for the entire month of February. At least I know that when the apocalypse comes, this is an option on the list right before eating my neighbors. Just in case I have no bacon, I hope I live next to bacon man. Yummy.

So how much will President Barack Obama’s budget cost us taxpayers? Toby Harden does the math.

We are so doomed. We will all still be paying this off in purgatory. If Obama makes it to purgatory, I guess he will suggest we get the top 2% in heaven to pay it off.

You want apocalypse? Do giant monsters scream “bad moon rising” or what?

This is a newly taken pic of the Borneo Monster. Yeah, that’s right. That’s a 100 foot of pure “I’ll squeeze you like a lemon and swallow you whole” snake. You want to know why there’s no legend of Bigfoot in Borneo; it’s because this things ate the Borneo Bigfoot and was hungry for some Chupacabra by brunch. As a Christian, I’m not scared of dying. Yeah, I’m frightened of getting chased and caught and squeezed until my eyes pop out like Marty Feldman’s.

As I wrote about this week, if we continue to use grain and grain fields to produce ethanol, we will all starve to death. But there is hope. As an alternative to this horrible scenario scientists have managed to harness the almost unlimited supply of hamster energy. Dr Zhong Lin Wang of Georgia University’s Nano Research Group developed the flexible jackets, which are fitted with wires plugged into a nanogenerator that produces energy when they are bent and stretched.

In tests one hamster named Campbell’s Dwarf produced small amounts of AC power – around one twentieth of the output of an AA battery.

I feel much better.

According to Fox News

“Autonomous military robots that will fight future wars must be programmed to live by a strict warrior code, or the world risks untold atrocities at their steely hands.

The stark warning — which includes discussion of a “Terminator”-style scenario in which robots turn on their human masters — is part of a hefty report funded by and prepared for the U.S. Navy’s high-tech and secretive Office of Naval Research.”

So next time you see this.
Think of this. 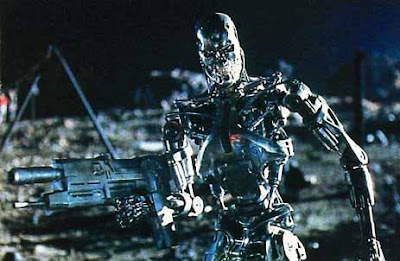 Back in December I wrote this in my (eerily prescient) 2009 prediction post:

More Riots in Europe. What will be hitting us economically will also hit Europe and maybe just as hard. The riots these past weeks in Greece are just the beginning. Ostensibly related to a police shooting, the real cause was economic. Greece is an economic basket case with massive crushing debt. The fact that this rioting has spread to other European cities shows that this frustration is widespread especially among youth. All this is just the beginning of the woes. As the economy dramatically worsens in the second half of 2009, rioting will be more widespread. Italy, France, England, and Germany will not be spared.

Yesterday this appeared on, of all places, Salon.com:

Feb. 26, 2009 | The global economic meltdown has already caused bank failures, bankruptcies, plant closings and foreclosures and will, in the coming year, leave many tens of millions unemployed across the planet. But another perilous consequence of the crash of 2008 has only recently made its appearance: increased civil unrest and ethnic strife. Someday, perhaps, war may follow.

If even the folks at Salon see the writing on the wall, apocalypse cannot be far off.

And finally, when you know that apocalypse is nearly upon us, the stress can sometimes get to you. So imagine, since you are all stressed out, so you decide to forget all your troubles and take a nice little jaunt to the aquarium. Lobster tank (boring), Stingray tank (better), Shark tank. Very exciting, you have almost forgotten your troubles when BAM! You notice the disembodied head in the Shark tank!

Folks at the aquarium are baffled about where the head came from. Umm, folks, it is a SHARK tank. Duh! We are so doomed.