Catholic Nuns Today? I Hope Not 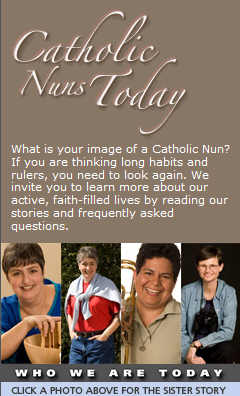 Envision a website dedicated to attracting young women to life as a nun. I look to the Nashville or Ann Arbor Dominicans as examples of flourishing and vibrant young communities leading the way. So when I visited the Catholic Nuns Today website that is what I thought I would find. I was wrong.

What I found is … this.
And that is the best part. The rest of the website is a bad acid trip down irrelevant lane. Take this pitch for instance. “Come be a nun, don’t worry it won’t get in the way of your day job.” Think I exaggerate?

Does being a Sister limit your career opportunities?

Not at all. And, our life is much more than a career. Our professional gifts are focused in service of God and of others. We use our gifts as physicians, teachers, missionaries, spiritual directors, social workers, psychologists, advocates for social justice, lawyers, counselors, ecologists, musicians, writers and artists to fulfill our vocation and our call.

Now meet Sister Linda Gibler, OP, of the Dominican Sisters of Houston. Sister is a former waitress who felt something was missing. Thank goodness she found it.

When I came to the Dominicans, I already had my BA in Sociology. I later received a Master’s in Pastoral Studies. My first jobs as a Sister were as a chaplain in a county hospital and in parish ministry. Later, when I saw the first of the pictures from the Hubble telescope, the beauty of the Universe overwhelmed me and I wanted to learn more about the relationships between philosophy, science, and religion. I went on to receive another Master’s in Philosophy & Religion. As I was studying, I investigated the “cosmocentric” aspects of Roman Catholic celebrations especially the use of water, olive oil, and fire in the sacraments. My Dominican congregation was extremely supportive of me and very encouraging throughout my eight years of discovery. I have just obtained my Doctorate in Philosophy & Religion with a concentration in Philosophy, Cosmology, and Consciousness.

Now you might have noticed that none of the nuns look like, well, nuns. That, they think, is a selling point.

Where have all the habits gone?

For many years, Sisters wore the long habits which were fashioned after the common dress of pious women in Medieval times. Even those Congregations founded in more modern times adopted similar styles of dress. The styles were handed down for generations, with only a few modifications, until the renewal of religious life following Vatican Council II in 1965. Since then Sisters have had the option of retaining the traditional habit or changing to a simple, modest contemporary style of dress. Some Sisters still prefer the traditional habit. You may recognize a Sister who does not wear a traditional habit by some small sign, a cross or pin, that is a distinctive emblem of her Congregation.

Were I doing this piece as parody, I bet some people would write in the combox that I overdid it. The future lies in growing traditional communities. Cosmocentric T-shirt Communities of 1972 like the Dominicans of Houston are the past; they just don’t seem to know it. I suppose the dinosaurs on the verge of extinction didn’t know their number was up either. Catholic Nuns Today? I don’t think so.